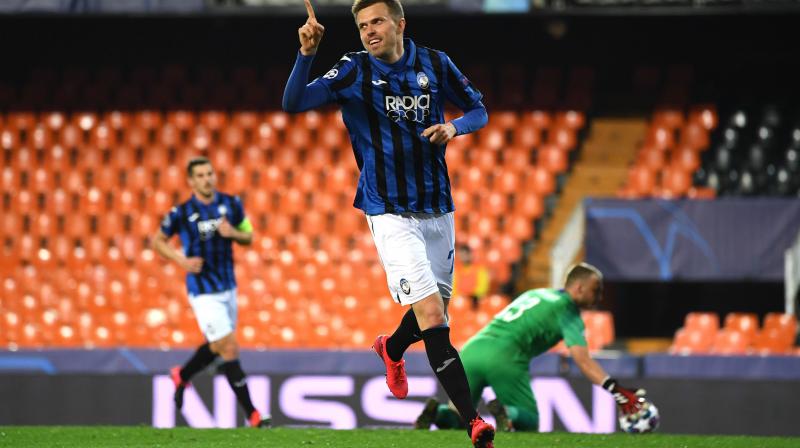 NO MAKING MISTAKE: Atalanta's Josip Ilicic seems to say after scoring his fourth goal during the Champions League round of 16 second leg match against Valencia in Valencia, Spain, on Tuesday. AP Photo

Valencia: Atalanta's fairytale Champions League run continued inside an empty stadium on Tuesday as Josip Ilicic scored four times in a 4-3 win over Valencia that sent his team into the quarter-finals 8-4 on aggregate.

A frantic contest inside an echoing Mestalla stadium was the first of several in the competition to be played behind closed doors due to the coronavirus, with 55,000 vacant seats creating a surreal atmosphere that was never likely to deliver a momentous Valencia comeback.

They had been tasked with overturning a 4-1 defeat from the opening game in Italy and any hopes were all-but dashed inside 90 seconds when Mouctar Diakhaby conceded the first of two penalties, each converted by Ilicic.

In between, Kevin Gameiro had levelled for Valencia and then scored again shortly after half-time before Ferran Torres lobbed in to leave the hosts needing three in just over 20 minutes.

Yet any chance of a revival was quickly snuffed out as Ilicic completed his hat-trick and added a fourth to ensure Atalanta ended a strange evening with their names in the draw on March 20.

The Slovenia international also became the first player to score four times away from home in a Champions League knockout match.

Atalanta's progress remains the greatest surprise of this year's tournament, in which they lost all three of their opening group games and are featuring for the first time in the club's 113-year history.