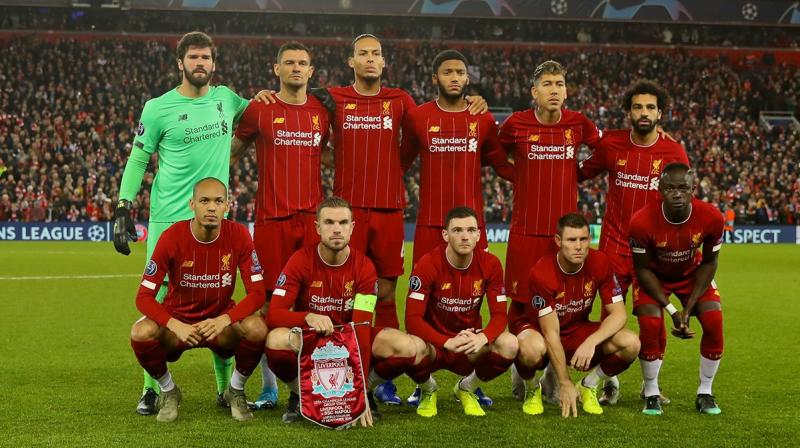 Holders Liverpool are approaching their last Champions League group game at Salzburg as if they are playing a final as they bid to reach the last 16, manager Juergen Klopp said on Monday. (Photo:Facebook)

LIVERPOOL: Holders Liverpool are approaching their last Champions League group game at Salzburg as if they are playing a final as they bid to reach the last 16, manager Juergen Klopp said on Monday.

Group E leaders Liverpool are a point ahead of Napoli and three in front of Salzburg, with all three teams still in the running to claim the top two spots and qualify.

Liverpool drew 1-1 with Napoli at Anfield in the last round of group matches, while Salzburg won 4-1 away to Genk.

"We drew the last game and after that game Napoli were for sure in a better mood than we were and Salzburg were in the best mood for sure, they won their away game and knew they could go to the next round by their own doing," Klopp told the Liverpool website here

“We knew immediately after the Napoli game we have a final, and we have to make sure we are prepared for a final.

“We always had to do it the hard way, I can’t remember one time when it was, ‘Oh fine, done’ a week before. We’re at least used to that.”

Liverpool will guarantee a place in the last 16 with a draw or if Napoli lose to Genk but may need a win to top the group and avoid one of the European heavyweights in the knockout round and Klopp said they would play for a victory.

If Napoli beat Genk, Salzburg must beat Liverpool by a better score than their 4-3 defeat at Anfield to progress.

“One thing is clear, Salzburg have to win,” Klopp added. “That’s the only really clear thing before the game. That sets the mark for the game as well.

“We don’t know exactly how they will approach it but anyway it’s clear they want to win. But that means they have to beat us and that’s not so easy – and we should use that fact as well.

“We will not go for a point, I actually have no clue how that works. We will try to win with all we have and at the end we will see what happens.”

Klopp said defender Dejan Lovren and midfielder Georginio Wijnaldum are fine after recovering from injuries while Adam Lallana did not make the trip as he recovers from a minor knock.

“Adam is not coming but will be back in training on Thursday,” Klopp said. “Under pressure we probably could have used him, but we didn’t want to make pressure.”

Midfielder Fabinho and defender Joel Matip will not return from injury until early next year.