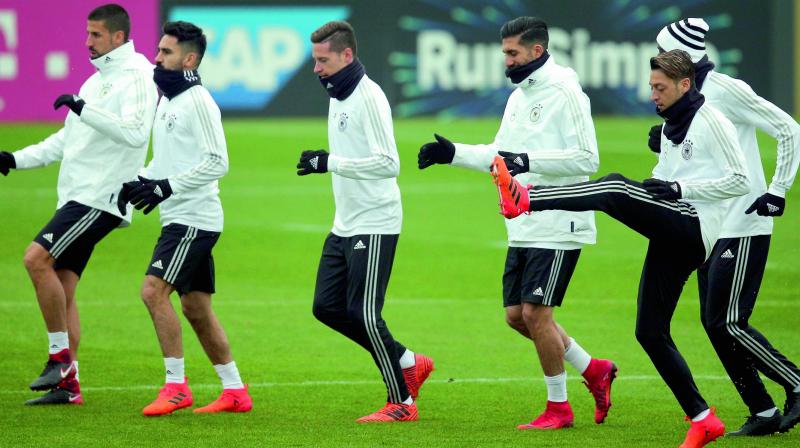 Germany’s Mesut Ozil (right) trains with team mates at a practice session in Berlin on Thursday, the eve of their friendly against England. (Photo: AP)

London: With both squads beset by injuries, Friday’s Wembley friendly between England and Germany represents an opportunity for fringe players and untested youngsters to stake claims to World Cup places.

Harry Kane, Dele Alli and Raheem Sterling are among the players to have withdrawn from England’s squad, while world champions Germany are without Manuel Neuer, Jerome Boateng and Thomas Mueller.

Whilst the fans who make their way to England’s national stadium may lament the absences of so many well-known stars, the players who remain in contention are rubbing their hands in anticipation.

“It’s one of the biggest and best stadiums in the world and it would be huge for me to be able to run out there.”

Hummels is expected to be fit despite sitting out training on Wednesday with a knock, but Real Madrid midfielder Toni Kroos is doubtful due to a gastrointestinal infection.

Midfielders Ilkay Gundogan and Mario Goetze are hoping to prove themselves worthy of a berth in Germany coach Joachim Loew’s World Cup squad after long spells on the sidelines.

Neither player has played for Germany since November 2016, Gundogan due to a serious knee injury and Goetze — whose goal against Argentina won the last World Cup — because of a debilitating metabolic disorder.

Southgate’s squad already looked inexperienced after he chose to call up the uncapped Joe Gomez, Ruben Loftus-Cheek and Tammy Abraham.

He has since been obliged to draft in another international newcomer in Burnley’s Jack Cork, with Everton defender Michael Keane and West Bromwich Albion midfielder Jake Livermore also joining the squad.

‘The best there is’ Nevertheless, Southgate always intended to use Friday’s game — and Tuesday’s meeting with Brazil — to test his options with a view to next year’s World Cup in Russia.

“We had to qualify, so to fiddle too much with the team and change the team while you are still having to win is difficult,” he said.

“Now we’ve got a phase where we can see what’s possible here. How can we evolve the team? How can we take it forward?”

Neither England nor Confederations Cup champions Germany are cutting corners when it comes to the calibre of the teams they will face in the build-up to the World Cup.

Germany, who are unbeaten in 19 games, host France on Tuesday and will play Spain and Brazil in March, while a friendly against Italy awaits England in their first game of 2018.

Jamie Vardy scored his first goal for England in a 3-2 comeback win over Germany in March 2016 and the Leicester City striker says such contests are vital for the team’s progress.

“That’s one of the main reasons why we’ve got the games coming up against the best there is — so we can try and test ourselves,” he said.

Regardless of the outcome of Friday’s encounter, history is guaranteed to be made with the use of a video assistant referee for the first time in an official match in Britain.

The system, which allows referees to consult video replays of contentious incidents, is already being trialled in Germany, Italy and Portugal.

In other matches, Mexico face Belgium, Poland are up against Uruguay, France take on Wales while Brazil meet Japan. Portugal clash with Saudi Arabia and Colombia play South Korea.