Phil has plans for a High-derabad

A taskmaster, the 60-year-old means business and has set the bar high. 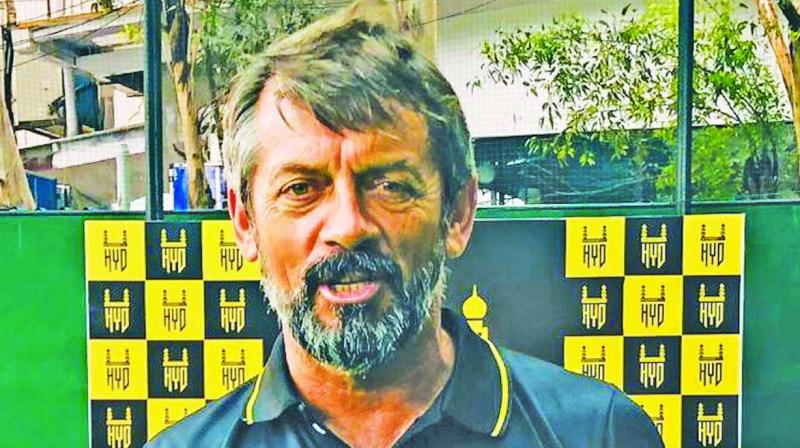 Hyderabad: At long last, Hyderabad, which has a rich history of football, has its own team in the country’s top division — the Indian Super League. The franchise was moved to Pearl City lock, stock and barrel after Pune ran into problems aplenty. With Hyderabad FC, head coach Philip Brown plans to paint a polished, powerful picture.

“To start a new journey in Hyderabad is fantastic, something I’ve never dreamt of. When you’re at the start of a journey, you’ve got a blank canvas, and the picture we’re trying to paint is of success, happiness and one that will create history,” the Englishman who has been involved with football for 40 years — 20 as a player and 20 as a coach/ manager — told this newspaper on Wednesday.

He’s looking at a burst off the blocks. “By the time we play our first game in Hyderabad (on November 2 vs Kerala Blasters), we would have hopefully created something in the two away games against Kolkata and Jamshedpur that our supporters would want to come and watch us. It has to be a two-way street and we have to meet the fans half-way not only with the kind of football that we’re playing but also the results we’re getting,” he says.

A taskmaster, the 60-year-old means business and has set the bar high. “We’re trying to achieve success in the first year,” is his audacious line.

“A lot of people will be hiding behind the fact that we’re in the first year and it will take time but I don’t want to wait for it happen. I want to try and create it, make it happen... and I think we’ve got the right group of players for that,” he explains.

Phil has history on his side though, having steered Championship side Hull City into the English Premier League in 2008 and plotting victories over Arsenal and Tottenham to be adjudged Manager of the Month. “Hull City was 105 years outside top flight football and we managed to achieve that. That kind of pressure is something I thrive upon. If I get a group of players who thrive in such situations and everybody signs up for a collective goal, we have half-a-chance,” he said of Hyderabad FC.

Big ask for sure, but Phil is tough as nails as well — he was warned, fined by the FA for being overtly aggressive. “You’ve got to have that kind of temperament when you are hard on the players and also empathetic or sympathetic to them if necessary. Football is a tough game and the beauty of it is that you have teammates. You don’t go through it on your own, but together. And I want the players to understand that what I am going through, they are going through too and vice-versa. If we share our collective responsibilities then we will be successful,” he reasons.

How does he find Hyderabad as a hurried home? “It’s been a sudden switch (from Pune) but we’re training in Goa at the moment with a great complex and hotel facility. The group is now binding very, very closely together, which is fantastic.”

However, Phil doesn’t make much of the pre-season warm-up games. “To me they don’t mean anything, for what comes out of the change rooms in Kolkata (when Hyderabad open their campaign against Atletico on October 25) will be totally different from a pre-season friendly. So you’ve got to prepare the players not only for the physical encounter but also the mental one to win games and finish at the top end of the table,” he feels.