Barcelona academy player Abel Ruiz is also key but the striker needs to step up his performance. Spain’s major concern is defence. 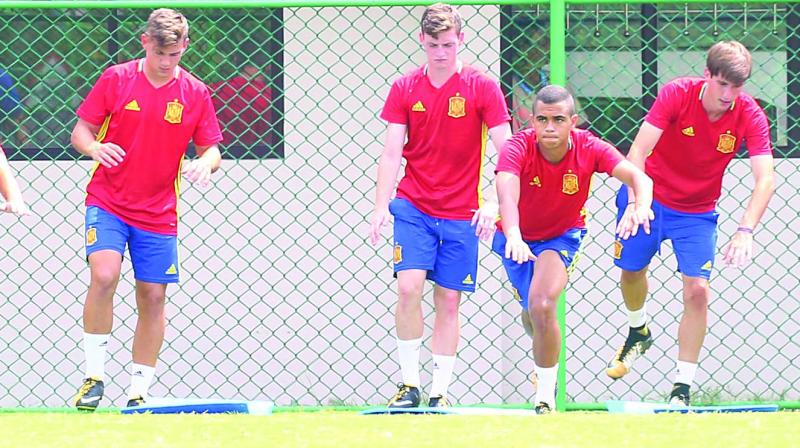 Members of the Spain team at a training session in Kochi on Monday, the eve of their Group D clash against Niger. (Photo: Arunchandra Bose)

Kochi: “Obrigado,” Brazil coach Carlos Amadeu said as thanks in Portuguese when he left the press room after their victory over Spain in the opening match here. The thanks was for the football-mad fans of Kerala, who have solidly supported Brazil, and the Little Canaries have a chance to repay their ‘12th man’ for all the affection when they face DPR Korea in their next Group D match on Tuesday.

Brazil are expected to win without hassles as the star-studded side showed their quality with an impressive display against Spain. The attack of Brenner, Lincoln and Paulinho is fearsome while their midfield led by Alan and Marcos Antonio is creative. Apart from a nervy start, the defence led by captain Vitao showed composure in warding off the mazy runs by Spain’s forwards.

Lincoln and Paulinho lived up to the expectations in the first match and the latter emerged as the star performer in the absence of Real Madrid signee Vinicius Junior, whose club mate Lincoln had a more subdued role but also found the net.

In midfield, while Alan has shown great technique, Marcos’ ability to create chances will give Korea added worry. It will be interesting to see how the Asians play their defensive game against this attack.

Korea’s captain showed flashes of creativity against Niger and forwards Kwon Nam Hyok and Kim Hwi Hwang are quick. It is likely that they will sit back and hit on the counter.

Spain facefearless Niger
For Spain, the biggest worry is the humidity as the Europeans are still coming to terms with Kerala’s tropical climate even as Niger will be buoyed by their win over DPR Korea.

Several of the Spain side were hit by cramps against Brazil and coach Santiago Denia agrees it is a huge concern. “In the first match humidity played a part. We have been here just for some days and still have to adapt,” he said.

The good news for Spain is that all their players have recovered after the coach was forced into two substitutions due to cramps. Winger Ferran Torres will be key to Spain’s success. His crosses were a matter of concern for Brazil and it will be a test for Niger’s fullbacks.

Barcelona academy player Abel Ruiz is also key but the striker needs to step up his performance. Spain’s major concern is defence. It was a silly mistake by Hugo Guillamon that cost them the early advantage against Brazil. The team had only one clean sheet in the European Under-17 championship and this weakness may impede their progress to the knockout phase.

Niger are ready to play party poopers for Spain.