Ronald Koeman's Netherlands still have work to do to reach a first major final since making the 2014 World Cup semi-finals. 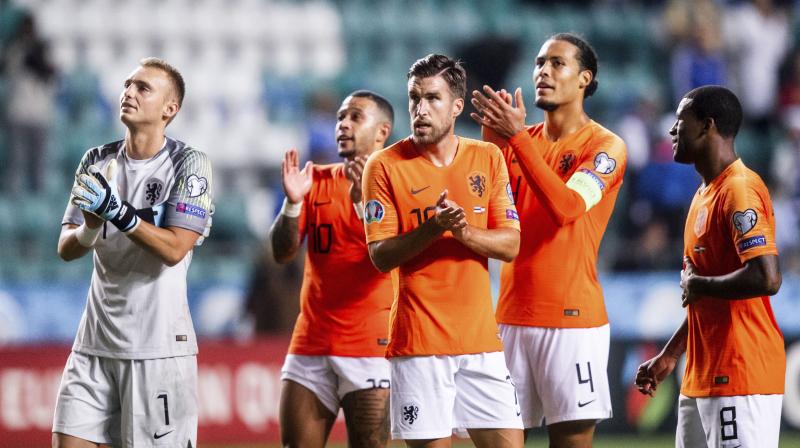 The Netherlands backed up their stunning 4-2 win over Germany in Hamburg last Friday by thrashing Estonia in Tallinn. (Photo: AP)

Paris: Belgium and the Netherlands both cruised to 4-0 wins over Scotland and Estonia respectively in Euro 2020 qualifying on Monday, while Germany claimed a crucial victory over Northern Ireland in their bid to qualify for next year's finals.

Roberto Martinez's Belgium, the world-number-one ranked side, were not at their best but still swatted aside a poor Scotland outfit at Hampden Park to make it six wins from as many matches in Group I.

Inter Milan striker Romelu Lukaku gave the visitors the lead in Glasgow in only the ninth minute with his Belgian record-extending 49th international goal.

Defenders Thomas Vermaelen and Toby Alderweireld ended the game as a contest with less than 32 minutes on the clock.

Manchester City midfielder Kevin De Bruyne, who had assisted each of the first three goals, completed the scoring himself with eight minutes remaining.

"It was not a world-class performance, we just did what we had to do," said Belgium captain De Bruyne.

"We had a tough start but after our first goal, we had more control and Scotland did not get many chances." Belgium, who finished third at last year's World Cup, are now 11 points clear of third-placed Kazakhstan at the summit of their group with the top two automatically qualifying and only four games to play.

"We knew that with a win we would almost certainly qualify, and that is most important," added De Bruyne.

Russia remains in pole position to progress from Group I with Belgium after Mario Fernandes' 89th-minute winner sealed a 1-0 win over Kazakhstan which moved Stanislav Cherchesov's men eight points ahead of their beaten opponents.

The Netherlands backed up their stunning 4-2 win over Germany in Hamburg last Friday by thrashing Estonia in Tallinn, as Ryan Babel scored his maiden international double.

Ronald Koeman's side still have work to do to reach a first major final since making the 2014 World Cup semi-finals, though, as they trail second-placed Northern Ireland by three points in Group C, albeit with a game in hand.

The Euro 1988 winners next host the Northern Irish on October 10 in a crucial encounter.

"I'm no longer one of the younger players in the team, so I try to compensate for the loss of speed by using my experience," the 32-year-old Babel told NOS TV.

"After the defeat against Holland, we were under pressure today and had to overcome some difficulties," said Germany boss Loew.

Earlier on Saturday, Croatia suffered a setback in their qualifying campaign as they were held to a 1-1 draw by Azerbaijan in Baku.

The 2018 World Cup runners-up took an early lead through a Luka Modric penalty, but the hosts hit back with Tamkin Khalilzade's brilliant 72nd-minute equaliser to claim their first point in Group E.

Leaders Croatia are only ahead of third-placed Hungary, who they host on October 10, by one point, with Slovakia second on head-to-head record after winning 2-1 in Budapest.

Wales are three points further back, but having played a game fewer.

"It wasn't a good match for us, especially the second half when we didn't take any chances," coach Zlatko Dalic told television channel HRT.

Azerbaijan, coached by Croatian Nikola Jurcevic, remain rooted to the foot of the table.

Elsewhere, North Macedonia kept their hopes of reaching a maiden major tournament alive with a 2-0 win in Latvia.

The Balkan nation sit fourth in Group G, but are only three points behind second-placed Slovenia after their dramatic 3-2 win over Israel, with Austria two points better off in third following a goalless stalemate at leaders Poland.