Rafael Marquez accused of financial ties with Raul Flores Hernandez, a suspected drug trafficker with links to the Sinaloa cartel. 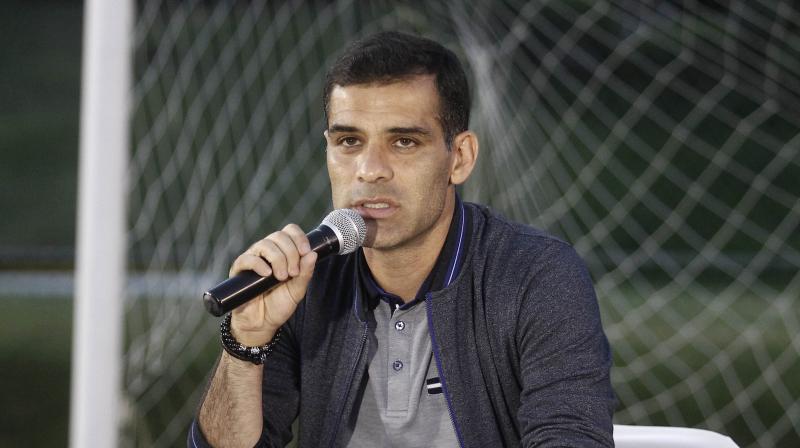 Rafael Maquez denied the accusations in a news conference Wednesday evening and vowed to cooperate with authorities. (Photo: AP)

Mexico City: The U.S. Treasury Department said on Wednesday it sanctioned major Mexican soccer star Rafael "Rafa" Marquez and more than 20 others for suspected links with an accused drug kingpin, tarnishing the reputation of one of Mexico's sporting giants.

Marquez, 38, along with a popular singer known as Julion Alvarez and nearly two dozen other Mexican nationals, is accused of financial ties with Raul Flores Hernandez, a suspected drug trafficker with links to the Sinaloa cartel and the Jalisco New Generation gang.

The U.S. Treasury Department said the designation was "the largest single Kingpin Act action against a Mexican drug cartel network that OFAC (the Office of Foreign Assets Control) has designated," and comes after U.S. President Donald Trump promised to crush Mexico's drug cartels.

"Raul Flores Hernandez has operated for decades because of his longstanding relationships with other drug cartels and his use of financial front persons to mask his investments of illegal drug proceeds," OFAC Director John E. Smith said in a statement, calling the move a "major joint action" with Mexico.

Maquez denied the accusations in a news conference Wednesday evening and vowed to cooperate with authorities.

"I deny categorically any type of relation with this organization," he said. "I understand the legal situation in which I find myself, and I will immediately focus my energy on the clarification of the facts with the support of my team of lawyers."

Marquez gave a voluntary declaration before the Mexican attorney general's office on Wednesday, the office said in a statement.

Marquez, who hails from the cartel-riddled state of Michoacan, is one of the country's best know sportsmen and has played in Europe for club sides FC Barcelona and Monaco. He still occasionally captains the Mexican national team, having represented his country in four World Cup soccer tournaments.

According to documents on the Treasury's website, Marquez was linked to Flores Hernandez's organization via a football school called Escuela de Futbol Rafael Marquez as well as various other sports and health outfits.

Marquez's current team, Club Atlas in Guadalajara, could not immediately be reached for comment.

The U.S. Treasury said it had sanctioned 43 entities linked to Flores Hernandez's holdings, from sectors including sport, hospitality and tourism and health.

Julio Cesar Alvarez, more commonly known as Julion Alvarez, is a popular "banda" singer. In a folksy video posted to his official Facebook page, Alvarez, 34, rejected the accusations against him.

"Everything I have, I've earned," he said. "I dedicated myself to making music, and thank God, I don't have the necessity to do many of the things they're accusing me of."

He added that he knew Marquez, and may invite him to join forces legally to defend themselves against the accusations.

In an awkward twist, Mexican President Enrique Pena Nieto had posted a photo of himself with Alvarez to his Instagram page this week, but deleted it just before news of the sanctions against Alvarez broke.

A spokesman from the president's office declined to comment on why the photo was deleted.

Trump vowed to dismantle transnational crime groups in a February executive order. Little change in strategy has been seen so far, although there are some signs of increased cooperation with Mexican security forces.