A tale to be told

Satish at first lacked the adequate motivation but with his coach’s support. he made it to the tournament. 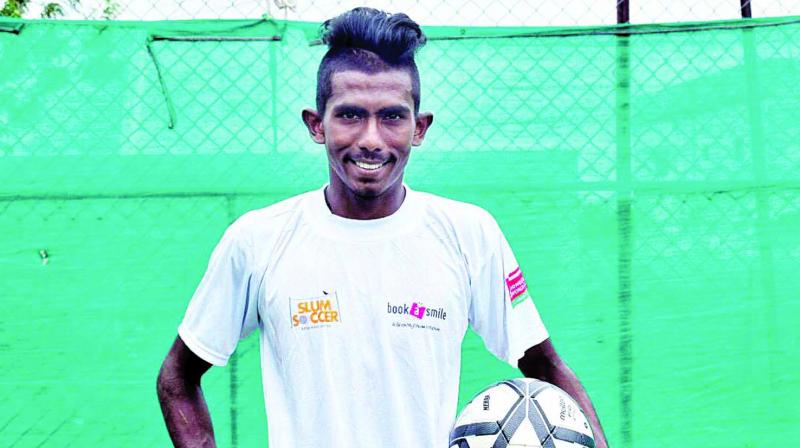 Ever set your eyes on something you’ve wanted so bad that the universe manages to somehow steer you to it? Well, no this is not a fairytale but the story of a young lad whose perseverance has taken him from rags to riches.  “I’ve seen aeroplanes fly past me but never did I think that I will travel in it one day,” says Satish Kumar who is now all set to strike his heart out on the football grounds of Cardiff.

Reminiscing his childhood Satish says, “When I was young I’d watch the boys in my neighbourhood play football and my favourite was Shiva. I see a brother in him, his moves and the way he played inspired me to choose football. I later played football in school and my then coach Mahesh was a big inspiration.” After being denied his hall ticket for not paying his tuition fee on time, he failed his 10th grade and almost succumbed to failure.

But, the universe did not give up. His coach Mahesh approached him to play for Karnataka in a tournament that was held in Mumbai. Satish at first lacked the adequate motivation but with his coach’s support. he made it to the tournament.

From then on, there was no looking back.  Satish shares, “I only focused on the game and we won it. Later I found that there was a programme called BookASmile an initiative by BookMyShow, which was short listing players to sponsor their ticket to participate in this World Cup.  Never in my dreams did I imagine that I will be one of those lucky players..”

Speaking about the reaction of his parents and friends, he says, “My dad never supported my passion of football only because he was worried I’d hurt myself. But, my mom was my biggest ally, she gave me the healthiest food that built my stamina. And, my friends stood by me in times of need and instilled the confidence in me to follow my dreams.”

When asked about what’s next for him, he humbly laughs and says, “Coming this far was a blessing, for a person who comes from a less fortunate background. It is difficult to even have big dreams and expectations. So, I will continue playing football and hope to make it to the Indian football team. And, when that happens, I will help many such young aspiring footballers to achieve their dreams too.”

His current coach and footballer Pankaj Mahaj adds,  “Satish is a physically strong player who has a very good touch-and-feel for the game. He understands how the tempo of a game can be controlled and can adapt his game to suit the opposition. He can use both his feet during the game and has a sharp eye for the goal. He is definitely a potential team captain with his positive attitude and team ethic demonstration.”