Fiery Belgians up against French finesse in semi-final. 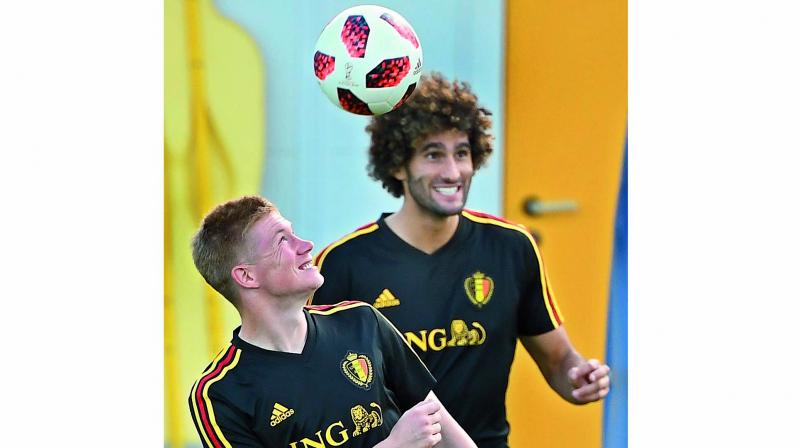 Kevin De Bruyne (left) of Belgium heads the ball next to teammate Marouane Fellaini at a training session. (Photo: AFP)

Moscow: The meeting of Belgium and France would have been a fitting finale to a fabulous World Cup in Russia but they are facing each other a match earlier. It goes without saying that the winners of the blockbuster semi-final between the two neighbours at St Petersburg on Tuesday will have the tailwind to fly high on July 15.

Fans of Latin American football will have a Hobson’s choice in picking a team to support in the first semi-final, as France and Belgium have knocked out Argentina and Brazil respectively here. Both matches had been a spectacle and Tuesday’s game also has everything to become a classic. No football lover would dare to miss the match between the two top sides.

Beating Brazil, the best all-round team in the tournament, in the quarter-final has burnished Belgium’s title credentials. And, they have the two devastating attacking midfielders in contemporary football, Eden Hazard and Kevin de Bruyne. The duo aren’t only creators of pure class; they are also excellent goal-scorers. It is one area where Belgium are far superior to France, for whom Paul Pogba continues to frustrate. The match on Tuesday will decide once and for all whether Pogba is an overrated show pony or indeed a world-class midfielder.

France, on the other hand, are more solid in defence. Raphael Varane and Samuel Umtiti are as good as any central defensive pair in the tournament. Les Bleus are also blessed to have the supremely effective defensive midfielder N’Golo Kante. Although seldom spectacular, he is a crucial player for France with his tireless work.

Not having a defensive midfielder in Kante’s class is certainly a disadvantage for the Red Devils, who would also miss the suspended full-back Thomas Meunier. Beglium aren’t as good in defence as they are in attack, although their goalkeeper Thibaut Courtois is slightly better than his French counterpart Hugo Lloris. If Lloris made a stunning save to deny Uruguay a certain goal in the quarterfinal, Courtois single-handedly secured Belgium’s passage to the semi-final with a string of superb saves against Brazil.

Belgium, unbeaten for a record 24 matches among the four teams still in the fray here, are not only diverse in team composition, they also have nine different goal-scorers in five matches. No wonder they are the most productive team in Russia with 14 goals. Defending against a team who pose multiple threats is never easy. When the focus is on the target man Romelu Lukaku, Hazard and De Bruyne can cause havoc through either wing.

France mainly rely on Kylian Mbappe’s pace on the counter to score in open play as a result of Antoine Griezmann’s persistent poor form while Belgium have the quality to create chances through build-up play in addition to the counter. That’s where Hazard and De Bruyne stand out.

France, who are in their sixth semi-final, have plenty of big-match experience. Belgium, who graduated from dark horses to favourites in Russia, are only playing their second. Familiarity with the stage is important during the business end of the World Cup.

The football world can’t wait for kick-off at St Petersburg. Has it ever witnessed a boring fight between two neighbours?