The Germans are on six points in Group C, three behind leaders Northern Ireland who beat Estonia 2-1. 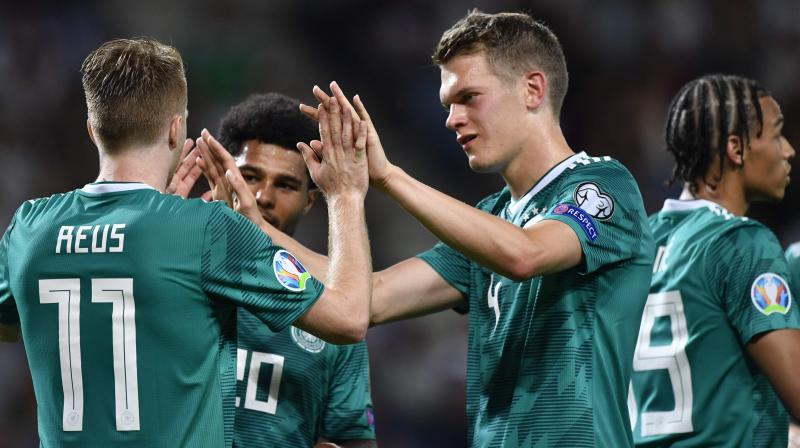 The Germans have won their two Euro qualifiers so far against the Dutch and Belarus on Saturday (Photo: AFP)

Berlin: Germany’s effort to rebuild a competitive squad after last year’s shock World Cup exit is on track and a third Euro 2020 qualifying win over Estonia on Tuesday will further boost their confidence, winger Serge Gnabry has said.

The Germans have won their two Euro qualifiers so far against the Dutch and Belarus on Saturday, with coach Joachim Loew having refreshed his team, dropping former stalwarts including Mats Hummels, Thomas Mueller and Jerome Boateng.

“We have a very youthful team, we understand each other very well because we have known each other since the youth teams and this development of the team is a lot of fun,” the 23-year-old Gnabry told a news conference on Monday.

The Germans are on six points in Group C, three behind leaders Northern Ireland who beat Estonia 2-1 on Saturday for their third win in three qualifiers.

“We feel young, we trust each other. We are better this year. We have two wins (from our qualifiers) and hopefully tomorrow we will win again,” Gnabry said.

“The development is very positive and the fact that we know each other well makes things a lot easier. Now we want to keep going down this path together.”

The Germans beat Belarus 2-0 in Borisov but they could have scored several more goals.

“We are obviously the favourites against Estonia. We will try to do our best to bag the three points again. We had many goal chances and should have scored more against Belarus,” he added.

But recent positive results have gradually attracted fans back to the stadiums with the team expected to play in front of a sold-out crowd of 26,000 in Mainz on Tuesday.

“It is more motivation for us the more fans there are in the stadium,” Gnabry said. “The enthusiasm of fans depends on results and we want to continue with this euphoria.”