Sports   Football  10 May 2019  Willian desperate for Hazard to stay at Chelsea
Sports, Football

Willian desperate for Hazard to stay at Chelsea

The Belgium forward is still expected to join Real in a big-money move this summer, but his teammate Willian continues to hope otherwise. 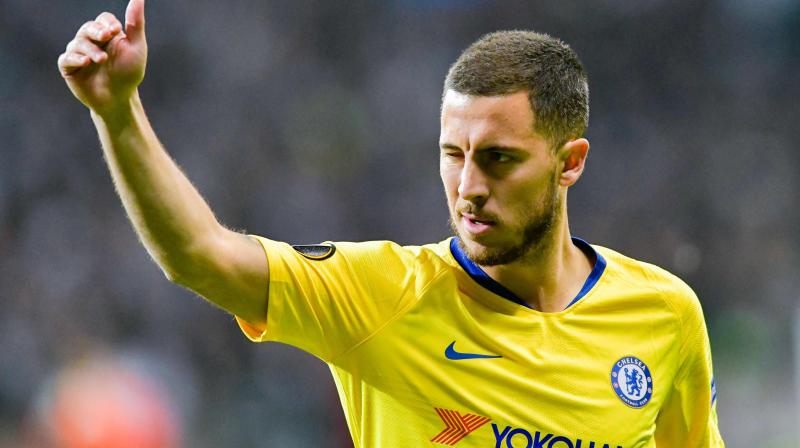 The Belgium star told BT Sport "In my mind I don't know yet" when asked if he had already played his last game at Stamford Bridge. (Photo: AFP)

London: Willian says Chelsea have refused to give up hope that talisman Eden Hazard will be at Stamford Bridge next season, with the Belgian apparently edging closer to a move to Real Madrid.

Hazard fired the winning spot-kick on Thursday as Chelsea edged out Eintracht Frankfurt 4-3 on penalties to book an all-English Europa League final against Arsenal, in what could prove his last act at Stamford Bridge.

The Belgium forward is still expected to join Real in a big-money move this summer, but his Brazilian teammate Willian continues to hope otherwise.

Luka Jovic cancelled out Ruben Loftus-Cheek's strike to take the semi-final second leg into extra time before penalties had to separate the sides with the aggregate score level at 2-2 and one away goal apiece.

Asked if Hazard's decisive penalty could prove his last kick at Stamford Bridge, Willian replied: "I don't know, I don't think so.

"For me, I hope he stays, but in football, you never know. I think his head is here, to play for Chelsea. Then after he's finished the season maybe he can talk about his situation.

"And he's one of the best players in the world."

Hazard appears close to sealing his Madrid move, with his Chelsea contract expiring next summer and the Blues understood to be holding out for 100 million pounds (130 million dollars).

The Belgium star told BT Sport "In my mind, I don't know yet" when asked if he had already played his last game at Stamford Bridge.

Chelsea boss Maurizio Sarri said his side would be worthy Europa League winners after a turbulent campaign that could end in success.

"We were in trouble three months ago and, here in England, if you're in trouble the level of opponents is very high and it's not easy to overcome difficulties," said Sarri.