Footballer's Brazilian lawyer has previously insisted that Ronaldinho's detention was 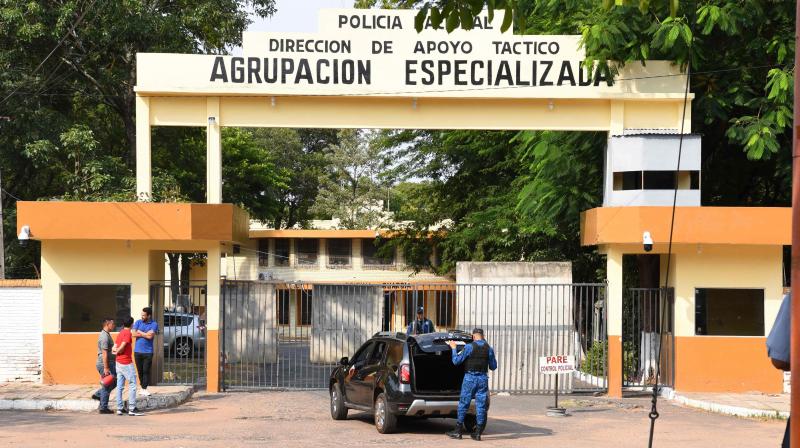 The National Police headquarters in Asuncion, where retired Brazilian footballer Ronaldinho and his brother Roberto Assis are held after being arrested for their irregular entry to the country. AFP Photo

Asuncion: Lawyers for Brazilian football great Ronaldinho are trying to organise a hearing to get him temporarily released from detention for allegedly entering Paraguay with a fake passport, defense sources told AFP.

Ronaldinho and his brother Roberto were arrested on Friday and held in pre-trial detention in Asuncion for entering Paraguay using forged documents.

Sources close to his defense team told AFP on Monday the lawyers were trying to get the brothers a hearing on Tuesday in the hope of securing their temporary release.

"Moro only called to obtain information on the case, because... the Brazilian government is following it," a justice ministry official said, denying that Brazil was trying to meddle in the case.

Ronaldinho's Brazilian lawyer Sergio Queiroz has previously insisted that the two-time world player of the year's detention was "illicit, illegal and unlawful." "Ronaldinho did not commit a crime because he did not know that the passport they gave him was faked," he said.

The brothers are spending a fourth day behind bars in the Paraguayan capital Asuncion, where late summer temperatures have soared to 40 degrees Celsius.

Queiroz wants the pair to be released and allowed to return to their home country. He said prosecutors originally agreed that the footballer had acted in good faith before a judge ordered their detention, which Queiroz described as unwarranted.

A Brazilian businessman has also been arrested in connection with the fake passports, while two Paraguayan women have been placed under house arrest and Paraguay's migration director has resigned.

Queiroz said the brothers were offered the passports "to facilitate the possibility of doing business" in Paraguay. "The idea was to position Ronaldinho with brands and companies," he added.

Paraguayan president Mario Abdo on Monday revoked by decree the legal status of the foundation that invited Ronaldinho to the country.