Jailed Ronaldinho's off the pitch reputation is quite tarnished

Charges against the footballer include corruption, bribery, crime and debts 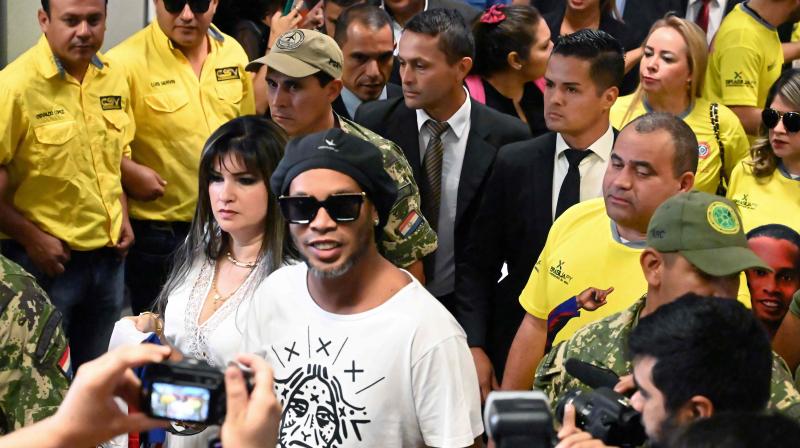 Sao Paulo: Retired soccer star Ronaldinho and his brother are in jail in Paraguay after being accused of entering the country using fake passports. It was the latest in a string of incidents involving the 2002 World Cup winner and Barcelona icon, who officially retired in 2018 after several lackluster seasons.
Here is a look back at some of the issues the Brazilian has faced off the pitch in recent years.

The Instituto Ronaldinho Gaucho (IRG), which was closed in the end of 2010, was investigated on two occasions due to allegedly irregular contracts with the Porto Alegre city hall. The first probe came in 2012, with city councillors claiming that more than $100,000 was paid to the educational institute led by Ronaldinho. That investigation ended after politicians decided there was no ill intent by the footballer and his brother in the case.

Three years later, state of Rio Grande do Sul prosecutors sought to open another case that was based on the 2012 probe, but this time they claimed the irregularities amounted to about $300,000. A judge later ruled there were no grounds to sentence the brothers.

Ronaldinho was fined for building an illegal fishing platform and dock on the shores of the Guaiba river in his hometown of Porto Alegre in 2015. He challenged the decision for years until a judge seized his passport, claiming he had to pay damages of about $2 million.

Despite not having his passport, Ronaldinho became a tourism ambassador for the administration of far-right President Jair Bolsonaro in September. Later, he paid the fine and had his documents returned.

The former footballer has been under investigation since the start of the year because of his links with a cryptocurrency company called 18kRonaldinho, which promised lucrative returns. Victims told media the initiative was actually a pyramid scheme and demanded damages of more than $65 million from the company. Ronaldinho's lawyer says he is not involved with it.

Barcelona distanced itself from its former star's support of Bolsonaro, a fringe far-right congressman who rose to power in 2019. After the former footballer endorsed Bolsonaro, club spokesman Josep Vives said in a press conference in 2018 that Barcelona's democratic values ``do not coincide with the words we have heard from the candidate (Bolsonaro)."

Vives added that Barca supports freedom of speech, but Ronaldinho has been a less frequent attendee of club events since. He used to be paid about 100,000 euros for each appearance.

Newspaper Folha de S.Paulo reported in July that Ronaldinho had multiple debts amounting to more than $2 million. At least four properties belonging to the former soccer star have been auctioned by a court in Rio Grande do Sul state.