Fans in Mumbai experience the premier tournament between European Clubs through trophy, quiz and interactive sessions. 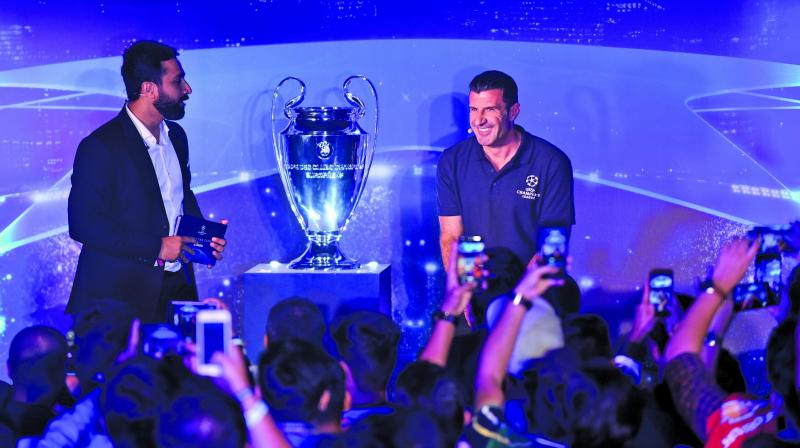 He changed his mind later to decide against contesting the elections. However, the former Real Madrid and Barcelona star is very much involved with the sport and brought UEFA Champions League trophy to Mumbai on his current visit.

On Friday, Figo as UEFA brand ambassador curated a unique event for the fans to reach out to the passionate audience in India. This event was the commencement of a global fan initiative by the UEFA Champions League in bringing the premium experience to potential fan base in markets like India. It was a memorable night for the fans to have the legend amongst them interacting and sharing some of his most memorable instances from his career. The event also hosted an interactive ‘Best of Best’ quiz which gave an opportunity to the winners in the attendees to click a photo alongside the UEFA Champions League trophy and the Portuguese superstar himself. Further adding to this thrill, there were also PlayStation booths setup for the football aficionados to bond over their love for the sport and their favourite teams.

“It’s a great honour to be able to bring the symbol of the UEFA Champions League to Mumbai. Fans in India are so knowledgeable and passionate about football and I’m excited to meet some of them and test their knowledge of this incredible competition,” Figo said ahead of the event.

“UEFA’s decision to hold a UEFA Champions League global fan event in Mumbai was an easy one,” said UEFA’s director of marketing Guy-Laurent Epstein. “Over 125 million fans globally follow the existing UEFA Champions League social media accounts and we want to be in a position to give football fans in India the opportunity to connect with this competition,” he added.

The event in Mumbai is the first in a series of global events that will take the iconic trophy on a journey to emerging markets, with events in Rio and Shanghai taking place later in this year.