Bayern ready for Liverpool after 6-0 hammering of Wolfsburg

This was a polished display from Bayern in their final match before hosting Jurgen Klopp's Liverpool in the last 16. 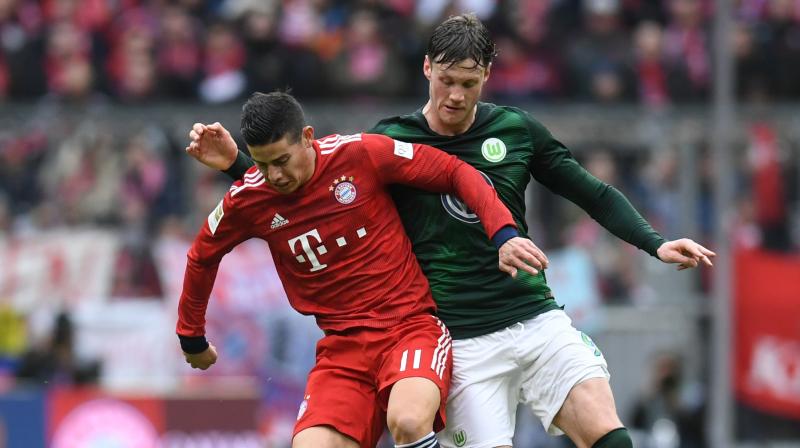 Berlin: Bayern Munich warmed-up for Wednesday's Champions League showdown against Liverpool with a 'feel-good' goal spree to seize control of the Bundesliga after a 6-0 battering of Wolfsburg.

"It was a perfect day - it feels good and is good for self-confidence. I think we can definitely win," said goal-scorer Joshua Kimmich with an eye on Liverpool.

This was a polished display from Bayern in their final match before hosting Jurgen Klopp's Liverpool in the last 16, return leg following a goalless draw at Anfield.

"I am very pleased," said head coach Niko Kovac with Bayern back on top of the Bundesliga for the first time since September on goal difference ahead of Borussia Dortmund.

"At no time were we in trouble, we could have scored more and now we are leaders - which is where we want to stay.

"We have another important game on Wednesday, that's what we want to focus on and win, then we'll see what the future brings."

Liverpool's future looks bleak at the Allianz Arena as Lewandowski, who loves scoring against Wolfsburg and now has 20 goals in 17 games against them, netted twice in Munich.

"I'm pleased with how we played today, that was a good game for the Champions League," said the Polish hot-shot, who became the Bundesliga's top-scoring foreigner with 197 goals.

Bayern's attack hit top gear with Rodriguez and Mueller, who had a point to prove after being dumped by Germany, on song.

Rodriguez called the shots in attacking midfield and scored their third with a brilliant strike.

Mueller gave a classy reply after being told by Germany head coach Joachim Loew on Tuesday, along with Bayern team-mates Jerome Boateng and Mats Hummels, that his international career is over.

Mueller set up Gnabry for Bayern's opening goal and then scored with a confident back-heel while both Boateng and Hummels let nothing past at centre-back.

"You saw the performance the three delivered," added Kovac.

"That was very good and what we expect from them, I was sure of it.

"The way they turned it into positive energy today speaks for them, as players and as people."

Kovac will have plenty of options as veteran winger Franck Ribery and midfielder Leon Goretzka both came on for the final 25 minutes to prove their fitness after injury.

French winger Kingsley Coman, always a threat on the left wing, could also feature against Liverpool after a hamstring injury.

"We are very positive and believe that he can play," said Kovac.

"We have to wait for training tomorrow (Sunday), Monday and Tuesday.

"We have four days, which we want to make good use of." Bayern are bidding to reach the quarter-finals of the Champions League for the eight season in a row.

"We were a little sluggish in the first 20 minutes, but scored some nice goals, prepared well for Wednesday and fuelled our self-confidence," said director of sport Hasan Salihamidzic "I am glad that we can take this momentum with us."