Another defeat and a Feyenoord win in the other Group A match, and United would have been eliminated. 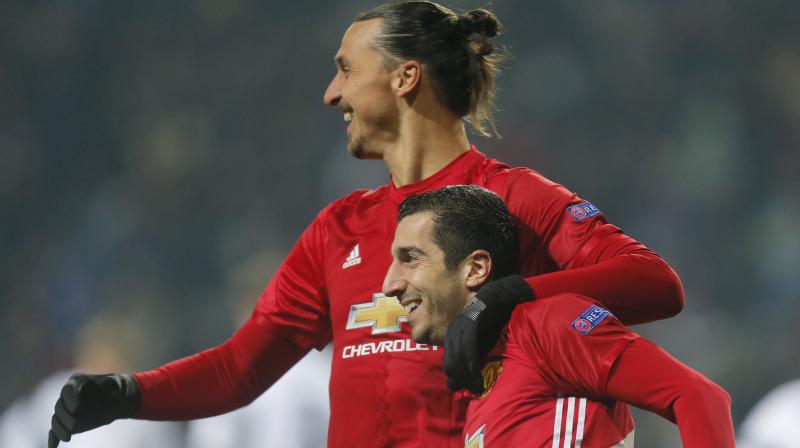 Odessa: Manchester United won for the first time in 10 away games in Europe and advanced to the Europa League knockout stage by defeating Zorya Luhansk 2-0 on Thursday.

Another defeat and a Feyenoord win in the other Group A match, and United would have been eliminated.

But midfielder Henrikh Mkhitaryan's first goal for United to begin the second half ended the team's frustration, and Zlatan Ibrahimovic came through at the end for his seventh goal in his last six matches.

"The first goal was magnificent," Ibrahimovic said on MUTV. "He came in speed and had control all the way. Then the timing to put between the legs was beautiful. He killed the game by scoring."

United was second in the group to Fenerbahce, which beat Feyenoord 1-0 courtesy of a Moussa Sow bicycle-kick goal.

AZ Alkmaar qualified from second place in Group D after beating group winner Zenit St. Petersburg 3-2. Ben Rienstra, Ridgeciano Haps, and Muamer Tankovic scored for the Dutch side. Giuliano pulled one back for Zenit, and Stijn Wuytens' own goal settled the score.

Saint-Etienne came from two goals down to beat Anderlecht 3-2 and claim Group C, after both had qualified.

Fiorentina moved into the knockout stage from the first place in Group J after beating Azerbaijan's Qarabag 2-1.

Matias Vecino's first goal of the season put Fiorentina 1-0 up an hour in, and substitute forward Reynaldo leveled in the 73rd. But three minutes later, Federico Chiesa netted the winner.

PAOK finished second in the group after a 2-0 win over Slovan Liberec.

Newcomer Osmanlispor made the round of 32 by beating Zurich 2-0 and finishing top of Group L.

Spanish side Villarreal was also through after beating Steaua 2-1, trailing Turkey's Osmanlispor by one point.

KAA Gent advanced with a 1-0 win at last place Konyaspor.

Eight other teams who played in the Champions League and finished third in their groups secured a consolation spot in the Europa League: Besiktas, Copenhagen, Legia Warsaw, Ludogorets, Lyon, Borussia Moenchengladbach, Rostov, and Tottenham.

The last two spots left will be decided later Thursday.