Indian football team faces another uphill task when it takes on Qatar in its most difficult match of the World Cup second round qualifiers. 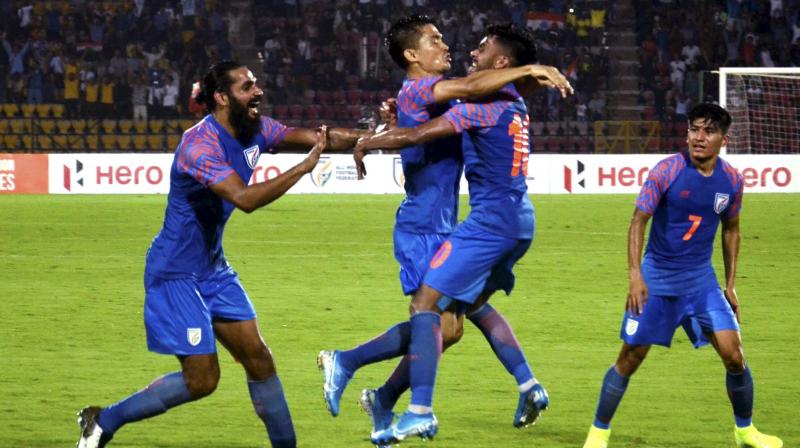 India let in two goals in the last eight minutes after taking an early lead to lose their opening match against Oman on September 5 in Guwahati. (Photo: PTI)

Doha: A heart-breaking loss in the campaign-opener has dented their chances of moving ahead and the Indian football team faces another uphill task when it takes on Asian champion Qatar in its most difficult match of the World Cup second round qualifiers here on Tuesday.

India let in two goals in the last eight minutes after taking an early lead to lose their opening match against Oman on September 5 in Guwahati.

Ranked 62nd in the world, Qatar will start Tuesday's Group E match against 103-ranked India as overwhelming favourites. They will look to claim their second consecutive win after crushing Afghanistan 6-0 in their opening match on September 5 here.

The World Cup hosts have improved by leaps and bounds in the last few years. They won the Asian Cup in the UAE earlier this year and they gave good competition to the top South American sides in the recent Copa America where they took part.

India have also shown improvement in recent times as was seen during the Asian Cup in January where they gave scares to the likes of the UAE and Bahrain and missed qualifying for the knock-out round by a whisker.

Historically, Qatar have been the dominant side, having won three out of four official matches played against India. One match ended in a draw.

The last time the two sides played an official match was in September 2007 in the World Cup qualifiers where Qatar had thrashed India 6-0.

India defeated Qatar 2-1 in Doha in 2011 in a friendly but that match was not considered an official game as India made more substitutions than the rules allowed.

In the match against Oman in Guwahati on September 5, India clearly dominated the first half with a 1-0 lead only to concede goals in the 82nd and 90th minute to suffer a heartbreaking loss.

Captain Sunil Chhetri, who scored the lone Indian goal against Oman in the 24th minute, conceded that Tuesday's match will be the most difficult of the campaign.

"We are, however, looking forward to it...there will be a fight, no matter who we play. We have to make sure we don't repeat the small mistakes that cost us three points (against Oman)," the 35-year-old talisman said.

Head coach Igor Stimac, who prefers possession-based football by building from the back, sought to dwell on the positives from the Oman match and said that his side has nothing to fear against Qatar.

"Qatar are the strongest team in the group and playing them will not be easy. However, it's a great opportunity to learn from. We have to change 4-5 players. There is no reason to fear and we shall look to score goals and play good football," Stimac said.

Qatari players are not taking India lightly and they are expecting a stern test from the visitors.

"India had a good match against Oman, despite the defeat. They also performed well in the AFC Asian Cup earlier this year and they are always improving. We know that they are a good team and we respect them," said defender Pedro Miguel.