Having lost the first leg in London 1-0, Spurs secured their place in the final thanks to a hat-trick from Moura which completed a 3-2 win. 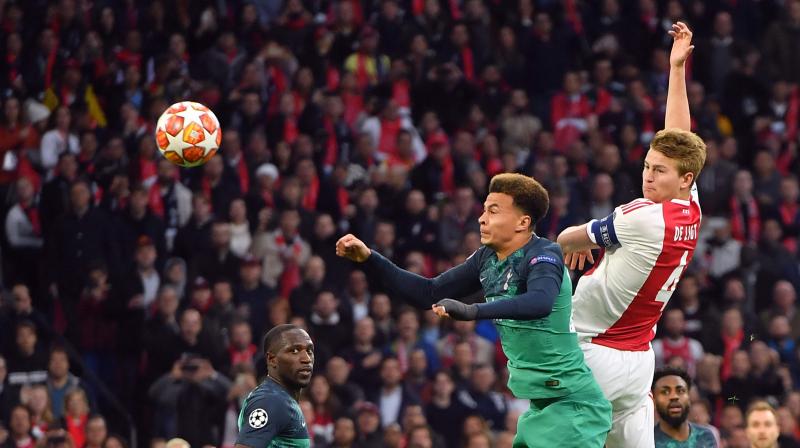 The result ended Ajax’s long, and barely plausible, ride through three preliminary rounds, starting in July, to the last four of the competition. (Photo: AFP)

Amsterdam: Ajax Amsterdam coach Erik ten Hag described their semi-final exit from the Champions League as “very cruel” after the Dutch side were undone by Lucas Moura’s 96th minute strike for Tottenham Hotspur on Wednesday.

“Football can be very beautiful and it can be very cruel. We have had to experience that today,” said Ten Hag, whose young side appeared to be heading for a final showdown with Liverpool on June 1 in Madrid until Moura’s last-gasp strike shattered their dreams.

Having lost the first leg in London 1-0, Tottenham secured their place in the final thanks to a hat-trick from Moura which completed a 3-2 win on the night. With the encounter ending 3-3 on aggregate, Spurs emerged triumphant on the away goals rule.

The result ended Ajax’s long, and barely plausible, ride through three preliminary rounds, starting in July, to the last four of the competition.

During that incredible run, they had knocked out holders Real Madrid and Juventus and on Wednesday were seconds away from a place in the final — until it all ended in heartache.

“Overall we had a fantastic Champions League campaign, we were one second away from the final and for that our team deserves a very big compliment, I’m very proud of my players,” said Ten Hag.

But the coach admitted that they let a golden opportunity slip through their fingers having been 3-0 ahead on aggregate with 45 minutes left to play.

“If you’re 2-0 up, you have to make sure you win the game, and we failed to do that. In the first phase after halftime we lost our grip on the game, they played a more opportunistic game,” he said.

“But after the score was level at 2-2 we dominated again and we created chances.

“It’s very bitter that none of those went in, and that they scored a very fortunate goal in the last seconds, maybe even past what should have the last second.”

Defender Daley Blind described the defeat as “a dream that had burst” while teenaged captain Matthijs de Ligt called it “a nightmare”.

“What am I supposed to say? It’s terrible. We were so close. This is a dream that has burst apart,” said Blind.

De Ligt added: “It’s a nightmare, like a dream that went bad.

“We played well in the first half, we had it all our way. We didn’t keep up the same pressure in the second half.

“We gave silly goals away. We were so close to the final … and then the ball goes in. Unbelievable.”