Several papers carried the iconic image of Ajax players in their red and white jerseys stretched out in despair on the grass after defeat. 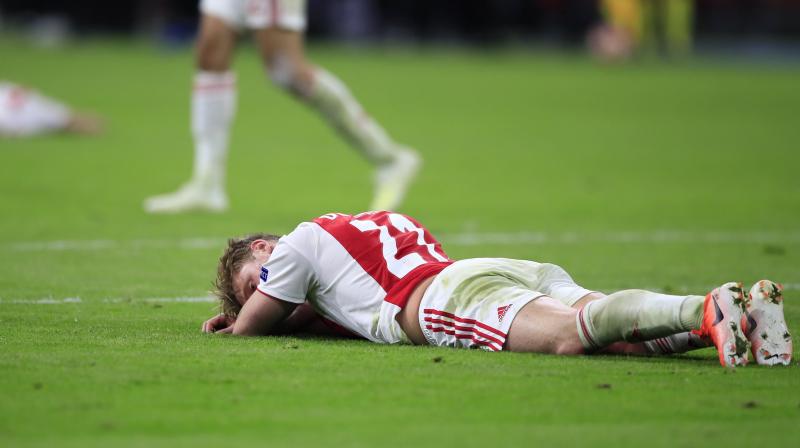 Many newspapers used the same language to describe the 'buttock-clenching' tension as Ajax let their lead slip away. (Photo: AP)

Newspapers sought the positives in the Amsterdam team's return to the front rank of European football after wins over giants Juventus and Real Madrid but were overwhelmed by the heartbreak of the loss.

Several papers carried the iconic image of Ajax players in their red and white jerseys stretched out in despair on the grass after Spurs' Lucas Moura sealed a last-gasp hat-trick to win 3-2 on the night. That put Spurs through on away goals following a 3-3 aggregate result.

"After the heyday in the seventies and nineties, Ajax is surfing on a new wave of success," Daniel Dwarswaard wrote in the Algemeen Dagblad newspaper.

"But the crown on the work is not there. It will feel like an extremely missed opportunity forever, and scar for years," he added. "An insane ending ruined everything."

Many newspapers used the same language to describe the "buttock-clenching" tension as Ajax let their lead slip away. Bart Vlietstra in Volkskrant said that "the fairytale ended for Ajax in sight of the final", blaming a "tsunami of attack waves" by Tottenham.

However, he said that "Ajax can look back on a great European campaign, one of the most awesome in the club's history" -- and one that could scarcely have been dreamed about at the start of the season.

"There was nothing good about Ajax, just a year ago," wrote Vlietstra, with the team having to go through qualifying to play in the Champions League, the Dutch Eredivisie having lost its automatic spot.

The NRC newspaper said that the "dream exploded in the final minutes" but said that the result should be put into a "broader context".

Writer Bart Hinke said that assumptions that a Dutch club had nothing to expect from the Champions League "even with the outcome that followed Wednesday evening, can be put into the trash."

"Johan Cruyff should have experienced this," he wrote, referring to the legendary player and coach whose name the Ajax stadium now bears.

The question now is what becomes of a squad that, created with a successful youth academy and clever recruitment, is now set to lose key players to giants like Barcelona over the summer.

Dutch papers also worried that the Ajax campaign may be a false dawn, noting the gulf with lower placed teams including PSV Eindhoven and Feyenoord, and the shame of the national side's failure to make the 2016 Euros and 2018 World Cup.

"The question then is: has the Dutch football crisis now been tackled? That seems a somewhat premature conclusion," wrote Jan-Cees Butter in Trouw newspaper.