The Madrid outfit would have been content with a mid-table finish this season but are guaranteed European football next season come. 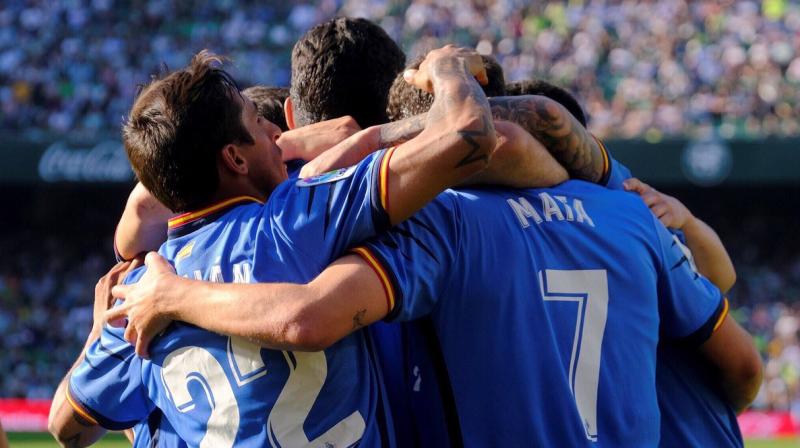 Getafe sit fourth on 58 points, three ahead of Valencia, and would ensure their place in Europe’s premier club competition next season with four points from their remaining two La Liga fixtures. (Photo: Getafe twitter)

Madrid: Unlikely Champions League hopefuls Getafe will visit Barcelona in La Liga this weekend hoping to further compound the Catalan outfit’s misery following their shock exit from Europe at the hands of Liverpool.

The Madrid outfit would have been content with a mid-table finish this season but are guaranteed European football next season come what may following a campaign that has exceeded all expectations.

They sit fourth on 58 points, three ahead of Valencia, and would ensure their place in Europe’s premier club competition next season with four points from their remaining two La Liga fixtures.

“It’s something historic, it’s fantastic, incredible. Our objective was to stay up and everyone knows that,” coach Jose Bordalas said.

“A league like the Spanish one seeing Getafe in the European positions is something special and we need to say well done to everyone. I’m so proud of everyone. We are not getting ahead of ourselves regarding fourth place.”

However they will face a wounded animal in the shape of champions Barca, who will be under pressure to produce a display to placate an irate fanbase following their European failure for the second successive season in what is their final home game of the season.

Getafe’s task will be made all the more difficult given they are without 14-goal top scorer Jaime Mata, who is missing through suspension.

“When you’re hit with a blow like this you have some horrible days, just like our fans will,” Barca coach Ernesto Valverde said after his side’s elimination on Tuesday.

“We need to serve our penance and rediscover ourselves; of course we’re hurting right now.”

On Sunday a depleted Atletico Madrid team missing three of their first choice back four will host sixth-placed Sevilla, who are still in with an outside shout of finishing in the Champions League positions if both Valencia and Getafe slip up in their remaining two games.

It will be Atleti captain Diego Godin’s final outing in front of the club’s home fans after this week announcing he will depart at the end of the season following a nine-year spell in the Spanish capital.

At the other end of the table, third-bottom Girona host fifth-bottom Levante on Sunday evening knowing a win would see them draw level on points with their fellow strugglers.

Just a point above Girona sit Valladolid – with 38 points - who have the chance to take a big step towards safety when they visit already relegated Rayo Vallecano at the same time.