Sports   Football  09 May 2019  'It was a non-tactical performance, more of a fight and heart performance': Eriksen
Sports, Football

'It was a non-tactical performance, more of a fight and heart performance': Eriksen

Having lost the first leg in London 1-0, Tottenham got off to the worst possible start in Amsterdam by going 2-0 down on the night. 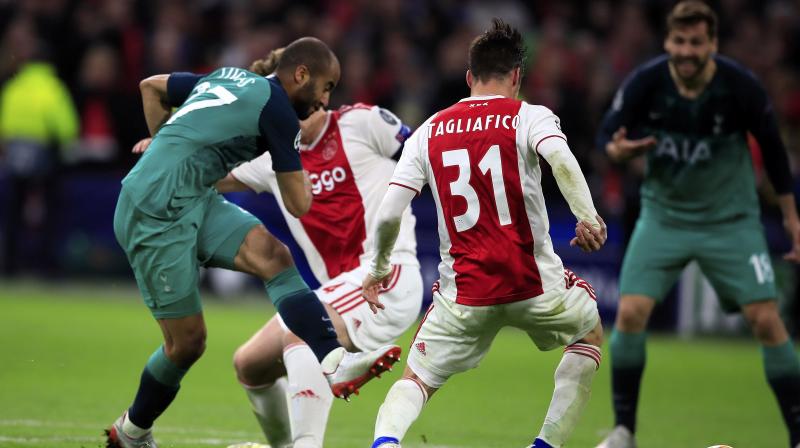 After Liverpool fought back from a 3-0 first-leg defeat to beat Barcelona 4-3 on aggregate on Tuesday, the final will be an all-English affair. (Photo: AP)

Amsterdam: Tottenham Hotspur midfielder Christian Eriksen said they threw tactics out the window and relied on grit and heart to come back from 3-0 down on aggregate to beat Ajax Amsterdam on away goals and reach the Champions League final on Wednesday.

Having lost the first leg in London 1-0, Tottenham got off to the worst possible start in Amsterdam by going 2-0 down on the night.

The second leg turned on its head after halftime, however, as Lucas Moura scored twice in quick succession before netting a 96th minute effort to complete his hat-trick and make it 3-3 on aggregate.

“It was a non-tactical performance, it was more of a fight, more of a heart performance, and that’s how we won it,” Danish playmaker Eriksen told BT Sport.

“It was a ridiculous game. We were really far down, we tried to fight back and we’re just lucky. I feel sorry for Ajax, they played a very good game against us.

“In the end we’re just lucky we scored. It’s a relief, because we’ve been fighting for this and I think it’s a dream for everyone to be in the Champions League final.”

The midfielder revealed that there was no great tactical change at halftime as Spurs simply rolled up their sleeves and went at Ajax in the second half.

“We weren’t able to look ourselves in the mirror if we (were to) go down three or four nil today - we had to fight back, there was no other option,” Eriksen said.

After Liverpool fought back from a 3-0 first-leg defeat to beat Barcelona 4-3 on aggregate on Tuesday, the final will be an all-English affair.

Spurs defender Danny Rose said that he had taken inspiration from the Merseysiders.

“We saw Liverpool last night. It goes to show it’s not over until it’s over. Disappointed with the first leg, how we started and we started like that tonight. But after the break we came out,” Rose said.

“The gaffer mentioned Liverpool’s display at the hotel before the match — the gaffer doesn’t mind us losing but we have to lose the right way.”

Moura, however, was not prepared to let the match slip, and slotted the winner for Spurs deep in stoppage time.

“It’s been a rollercoaster of a season. For him (Moura) to get us in the final, he’ll be a hero. I hope he gets a statue in England after this ... I’m blown away, there’s really no words for it,” Eriksen said.

There was one major tactical shift that did play a crucial role in the victory, however. At half-time Pochettino took out midfielder Victor Wanyama and replaced him with Spanish forward Fernando Llorente.

Llorente, whose main asset is his height and strength in the air, placed himself on Ajax defender Daley Blind and that upset the solidity of the Dutch defence.

The Spaniard’s presence caused confusion and created instability which Moura was able to exploit to the full.

With a big man as a focal point for the attack, Tottenham were able to take a more direct approach — with crosses from deep and in the latter stages, hopeful punts into the box.

Llorente would not have been on the field had Spurs’ first choice striker Harry Kane been fit but the injured England captain was in the dressing room at the break and he said the focus was purely on effort.

“At half time we said it is 45 minutes to give everything... the lads dug deep, showed passion, showed character, showed heart and that is what it’s all about,” said Kane.

“Over the two legs we didn’t play as well as we would have liked but we found a way to win,” he added.

Former England and Manchester United defender Rio Ferdinand, in Amsterdam as a pundit for BT Sport, said the Llorente introduction had been key.

“Fernando Llorente - what a substitution. He stood on Daley Blind. Blind couldn’t deal with him and the boys came up behind him.”