Kane, who sprinted onto the pitch to celebrate with his team mates, could possibly return for the biggest game in the club’s history. 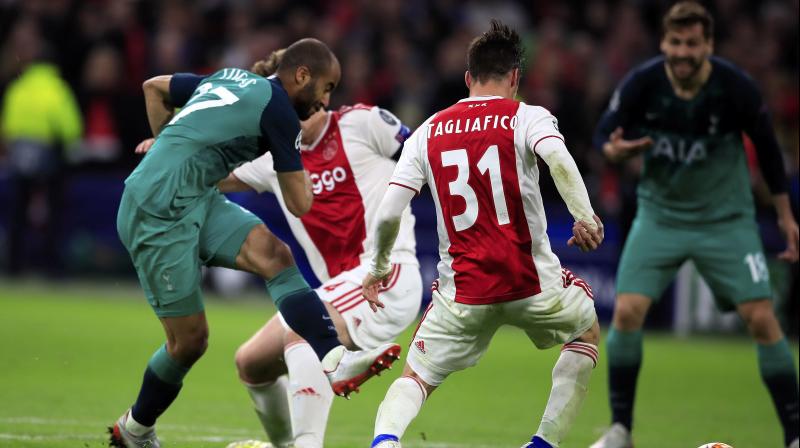 Tottenham looked down and out at the break as they trailed 2-0, 3-0 on aggregate, but were transformed in the second half with Brazilian Lucas Moura, Kane’s stand-in, scoring a hat-trick to send the Londoners through on away goals. (Photo: AP)

Tottenham looked down and out at the break as they trailed 2-0, 3-0 on aggregate, but were transformed in the second half with Brazilian Lucas Moura, Kane’s stand-in, scoring a hat-trick to send the Londoners through on away goals.

Defender Kieran Trippier said Kane had not minced his words at halftime with Spurs trailing to an inspired Dutch side and heading for a fourth successive defeat in all competitions.

Whatever Kane said, it clearly worked a treat.

“It was a disappointing first half and we let them play. I went into the dressing room at half time and we knew it wasn’t good enough,” Kane, who damaged his ankle in last month’s quarter-final first leg against Manchester City, said.

“We said we had 45 minutes to give everything. I’m a fan first and foremost and I know how much it means to the club.

“The lads dug deep and showed passion and that is all you can ask for. We had to wait to get the third in the last minute and we found a way. I’m just speechless. I’m a fan, I want to win and I know how much it means to everyone at the club.

“I’m looking at the game and thinking about what I’d be doing out there. You can’t switch out of that mode but the lads showed passion, spirit and heart.”

With the all English showdown against Liverpool on June 1 in Madrid, Kane, who sprinted onto the pitch to celebrate with his team mates at the final whistle, could possibly return for what would be the biggest game in the club’s history.

“Rehab is going well. I start straight line running this week which is why I was okay to run on at the end,” he said.

England skipper Kane says he would take nothing for granted, however, even if he was fit.

“We beat Manchester City and Ajax so I have to start training even harder to prove myself to the gaffer,” he said.

“We’ve just got to take all this in and then look forward to the final.”