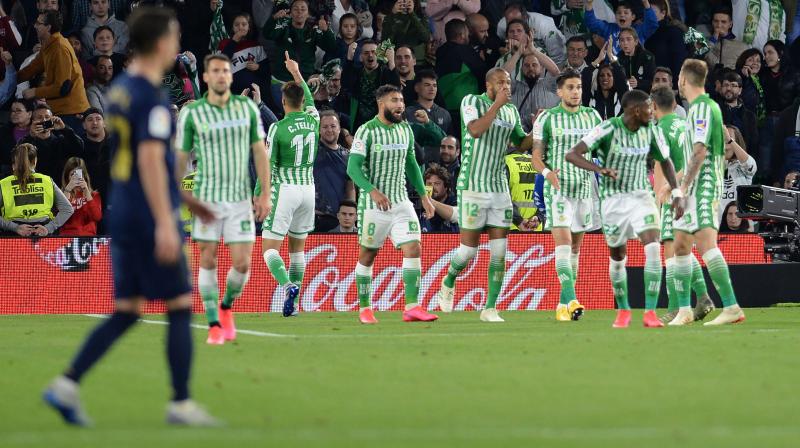 Cristian Tello (3rd from left) celebrates his goal with his teammates as Real Betis handed Ral Madrid one of their biggest defeats in La Liga this season at the Benito Villamarin Stadium in Seville on Sunday. AFP Photo

Madrid: Real Madrid's response to winning the Clasico was another surprise defeat on Sunday as they lost 2-1 away at Real Betis to hand the initiative straight back to Barcelona.

Betis were deserving victors of a thrilling contest at the Benito Villamarin where two galling Madrid errors cost them their place at the top of La Liga, with Barca now two points clear.

A heavy touch from Sergio Ramos led to Sidnei's stunning opener for Betis and then Karim Benzema, who equalised with a penalty on the stroke of half-time, was at fault for their 82nd-minute winner.

Benzema's misplaced pass in midfield allowed Cristian Tello to go clear and he held his nerve to give Betis their first victory in eight games that adds yet another twist to this season's back-and-forth title race.

Madrid appeared to have taken a significant step forward, at least psychologically, by beating Barcelona 2-0 last weekend but this result undid all their good work at the Santiago Bernabeu while bringing defensive doubts swiftly back to the surface.

Betis climb to 12th and put eight points between themselves and the bottom three.

Madrid have now lost three out of their last four games and won only two from seven, a dip in form that has appeared even more charitable given Barca's own problems on and off the pitch.

After a game at home to Eibar on Friday, Zinedine Zidane's side will travel to Manchester City in the Champions League but on this evidence their hopes of recovering their 2-1 home defeat from the first leg would seem faint at best.

Ramos will be suspended at the Etihad Stadium and his own poor run of form continued against Betis, where he was at fault for their first goal and then complicit in compounding Benzema's error for the second.