Barcelona remained dominant throughout the clash, with Luis Suarez putting his side ahead as early as in the third minute of the match. 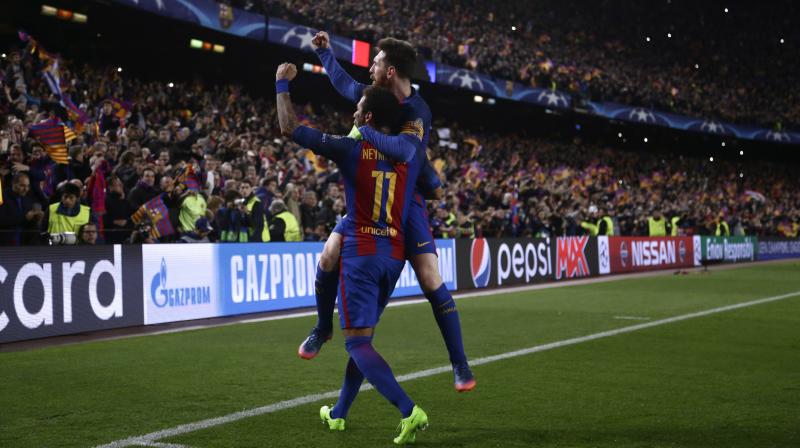 Neymar pulled two goals for Barcelona via a free-kick and penalty in the last few minutes before setting up Sergi Roberto for a 95th-minute winner. (Photo: AP)

Barcelona: Lionel Messi, Luis Suarez and Neymar all scored goals as Barcelona booked their place in the quarter-finals of the Champions League after clinching an aggregate 6-5 win over Paris Saint Germain at Camp Nou on Thursday.

Luis Enrique's side, who were hammered 0-4 in the first leg at Parc des Princes, went on to claim a thrashing 6-1 win over PSG in the second leg to reach the last-eight for the 10th straight season.

remained dominant throughout the clash, with Suarez putting his side ahead as early as in the third minute of the match.

Layvin Kurzawa then struck a goal in his own net to double the hosts' lead in the 40th minute before Messi pulled the third goal of the match ten minutes later.

Although Edinson Cavani smashed a consolation away goal for PSG in the 62nd minute, scored three times from the 88th minute onwards at to complete the biggest turnaround ever seen in the competition.

Neymar pulled two goals for via a free-kick and penalty in the last few minutes before setting up Sergi Roberto for a 95th-minute winner.

The crushing defeat sees PSG beaten by in the knockout stages once again, having suffered the same earlier in 2013 and 2015.