Burnley’s defence was brutally exposed from the beginning as Kane drifted across the middle and smashed an unstoppable shot from the edge. 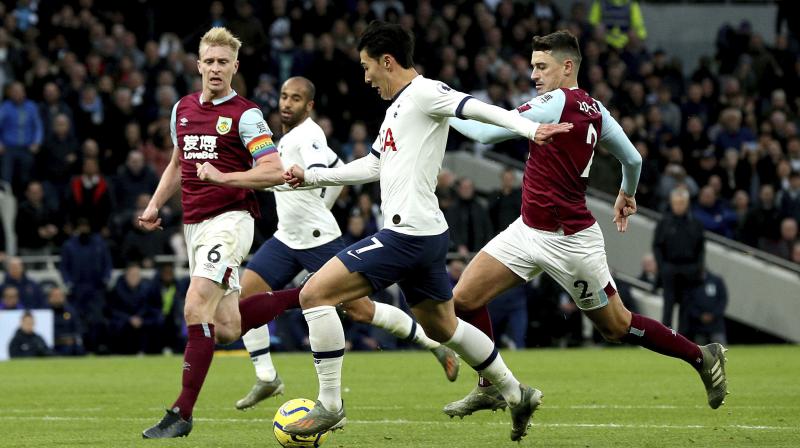 Two classy strikes by Harry Kane and a sensational solo goal by Son Heung-min powered a dominant Tottenham Hotspur to a 5-0 thrashing of Burnley on Saturday, the third straight Premier League defeat for the visitors. (Photo:AP)

LONDON: Two classy strikes by Harry Kane and a sensational solo goal by Son Heung-min powered a dominant Tottenham Hotspur to a 5-0 thrashing of Burnley on Saturday, the third straight Premier League defeat for the visitors.

Burnley’s defence was brutally exposed from the beginning as Kane drifted across the middle and smashed an unstoppable shot from the edge of the area after just five minutes.

Lucas Moura doubled the advantage four minutes later after Son caused havoc with a dribble into the box. Despite his shot being blocked, Burnley failed to clear the danger and Brazilian Moura poked the ball over the line at the far post.

Son made it three with a wonder strike in the 32nd minute, picking up the ball deep in his own half before embarking on a searing run through the heart of the Burnley rearguard, and this time he made no mistake as he confidently stroked the ball home.

Kane exploited more bad Burnley defending early in the second half as he again cut in from the left and rifled the ball into the top corner for his eighth goal in nine games against Burnley.

For all the individual brilliance on show, Tottenham’s fifth in the 74th minute was a team effort as they once again sliced open the hapless Burnley defence before Moussa Sissoko’s controlled finish completed the rout.

Son played down his fine strike.

“When I got the ball and tried to pass it to Dele (Alli) but I couldn’t find him so I just kept going,” he said. “I am happy to score this goal.”

Spurs manager Jose Mourinho described it as “a perfect day”, comparing Son’s strike with one by Ronaldo Nazario for Barcelona.

“I remember when I was at Barcelona with Mr (Bobby) Robson and Ronaldo Nazario scored a goal that is similar to Son’s,” he said.

“And this was an amazing goal. I know that he is going to reach the face of the keeper and the control he is unstoppable. The keeper is good, though, but he managed to put it in.”