Madrid were not at their best but moved three points clear of rivals Barcelona, who hosted Real Mallorca in the late game. 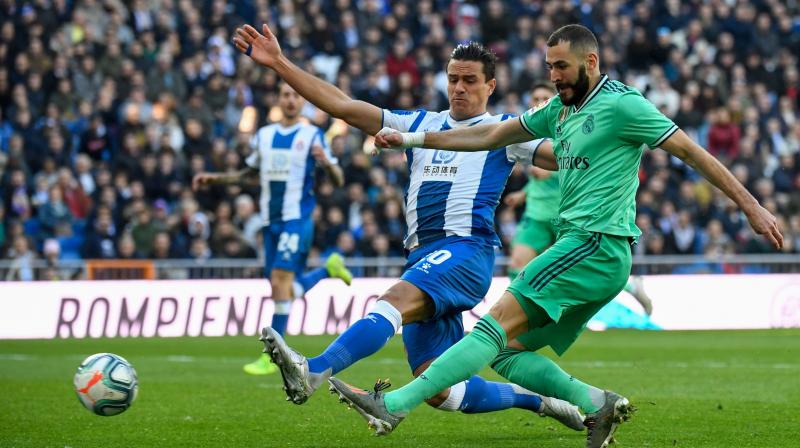 Real Madrid’s Raphael Varane and Karim Benzema scored in each half to earn a comfortable 2-0 home win over Espanyol that sent their team provisionally top of La Liga on Saturday. (Photo:AFP)

Madrid: Real Madrid’s Raphael Varane and Karim Benzema scored in each half to earn a comfortable 2-0 home win over Espanyol that sent their team provisionally top of La Liga on Saturday.

Madrid were not at their best but moved three points clear of rivals Barcelona, who hosted Real Mallorca in the late game. Real have 34 points from 15 games with Barca on 31 from 14.

Varane broke the deadlock in the 37th minute after a quiet opening to the game, with fellow France international Benzema setting up the defender to neatly slot the ball home.

Benzema missed two good chances but got the second goal from close range in the 79th before Madrid defender Ferland Mendy was sent off four minutes later for a second yellow card.

“It was a very demanding game on a physical level, they pressed us high up and we had to be patient in front of goal,” said Varane.

“We tried to play our game but we lacked the final ball to hurt the opponent. We played well and they did too.

“We have a run of complicated games coming, we’re prepared, confident and will give our best to take on this run and finish the year well.”

Madrid had more of the ball in the early stages but needed goalkeeper Thibaut Courtois to make a fine save to keep out Wu Lei’s header.

The Espanyol striker became the first player from China to play at the Santiago Bernabeu, with the lunchtime kick-off in Spain ideal for evening viewing in his homeland.

However the China international saw little of the ball as Madrid dominated, despite not creating many clear chances.

Eventually the hosts moved ahead when Benzema teed up Varane, who tucked the ball into the bottom corner with his weaker left foot.

Benzema should have doubled the lead early in the second half but Espanyol’s long-time Madrid goalkeeper Diego Lopez denied the Frenchman as he raced towards goal in a one-on-one.

The forward also fired narrowly wide after being set up by Vinicius, but eventually netted his 11th league goal of the season from Fede Valverde’s pass to wrap up the victory.

Vinicius’s impressive display could earn him a place in the Clasico against Barca at the Camp Nou on Dec. 18.

“Yes (he played well), but the important thing is not scoring, maybe for him it is, but it’s his work, he did really well,” said Zidane.

“Today the plan was to go with three up, a lot of speed with Vini and Rodrygo and they did really well.”