In 67th minute of the match, Fred and Jesse Lingard had objects including lighters and water bottles thrown at them from the stands. 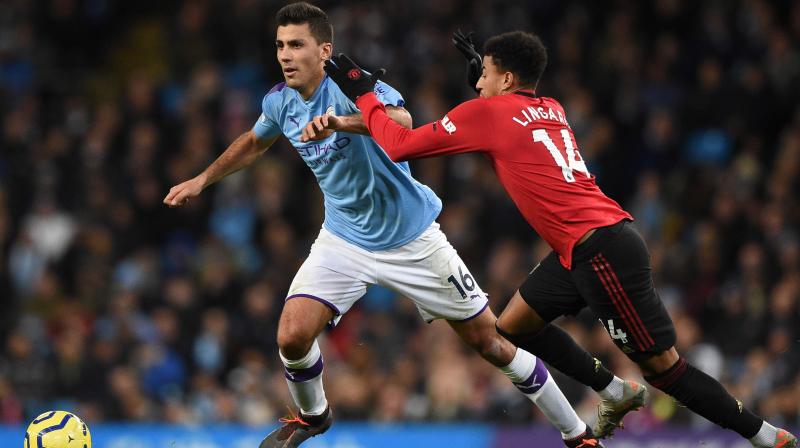 Manchester City has released a statement, saying that they will work with Greater Manchester Police in order to identify the person behind targetting racial slurs at Manchester United's Jesse Lingard. (Photo:AFP)

Manchester: Manchester City has released a statement, saying that they will work with Greater Manchester Police in order to identify the person behind targetting racial slurs at Manchester United's Jesse Lingard.

Manchester United defeated Manchester City 2-1 on Saturday (local time), but in the 67th minute of the match, United's Fred and Jesse Lingard had objects including lighters and water bottles thrown at them from the stands, Goal.com reported.

Television cameras also picked up that a fan was making a monkey gesture towards one of the above two mentioned players and that clip immediately started getting circulated on social media.

"Manchester City FC is aware of a video circulating on social media which appears to show a supporter making racial gestures during the second half of the match against Manchester United this evening," Manchester City said in an official statement.

"Officials from the Club are working with Greater Manchester Police in order to help them identify any individuals concerned and assist with their enquiries. The Club is also working with GMP regarding an instance of objects being thrown onto the field of play," it added.

This is not the first time that a racist slur has been hurled for a football player. Earlier this year, Manchester United's Paul Pogba and Marcus Rashford were racially abused on social media after they failed to convert a penalty.

During the Euro 2020 qualifiers, England's players were also subjected to racial abuse at Bulgaria and play had to be stopped twice. A formal announcement was also made at the stadium to ask fans to not do such a thing.

Earlier this week, an Italian newspaper named 'Corriere dello Sport' used the headline 'Black Friday' to build-up a match between Inter Milan and AS Roma.

Images of Romelu Lukaku (Inter Milan) and Chris Smalling (AS Roma) were used along with the headline. Both these players were former teammates at Premier League side Manchester United.