Spain got the opener through an own goal by Brazilian fullback Wesley but Brazil overcame the initial jitters to kick-start their campaign in style. 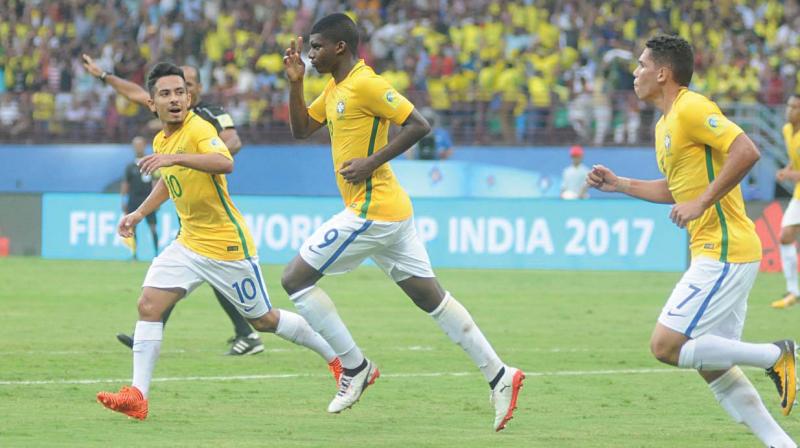 Brazil’s Lincoln (centre) celebrates with team mates after scoring against Spain in their U-17 World Cup match at the Jawaharlal Nehru Stadium in Kochi on Saturday. Brazil began their campaign with a come-from-behind 2-1 victory. (Photo: Sunoj Ninan Mathew)

Kochi: Upcoming stars Lincoln and Paulinho made their presence felt with a goal each as Brazil romped to victory over Spain, 2-1, in the Group D opener of the Under-17 World Cup at Jawaharlal Nehru Stadium here on Saturday.

It is rare to see a Spanish team without meaningful possession but thousands of yellow-clad Brazil fans saw such a first half, in which their team’s forwards harassed the young La Rojas.

Spain got the opener through an own goal by Brazilian fullback Wesley but Brazil overcame the initial jitters to kick-start their campaign in style.

Brazil were warmly welcomed here and responded to the affection shown by the fans by entertaining football after they went a goal down in the fifth minute.

Spain captain Abel Ruiz should have scored in the third minute as Ferran Torres fed him with a neat pass but Brazilian goalie, Gabriel Brazao punched it away.

Soon after Spain took the lead as Torres, who showed impeccable running skills down the right flank, beat Brazilian fullback Weverson and his cross was out into his own net by Wesley while trying to clear the ball.

Brazil responded brilliantly. Paulinho created the first chance but his effort from the edge of the box was parried away by Spain goalie Alvaro Fernandez. Brenner, on who has come in for missing star forward Vinicius Junior upfront, almost equalised but his 24-yard shot missed the far post by a whisker.

The crowd and Brazil did not have to wait too long for the equaliser.

Alan released Brenner through the left flank and he passed back to Lincoln from near post.

The Flamengo forward fluffed his first attempt but the Spanish defenders’ failure to clear the ball helped Lincoln to equalise easily.

Brazil took the lead in injury time as Paulinho scored from a perfectly-placed Marcos Antonio pass.

Spain tried to find a way back in the second half but Brazil held their composure.

Marcos should have made it 3-1 but the midfielder, who tricked the defenders and ran through the right wing, decided to pass it to Paulinho with only Alvaro to beat.

It was a soft touch by Marcos and Alvaro intercepted the ball.

Niger EDGE DPR Korea
Debutants Niger started their campaign with a 1-0 win over DPR Korea in a spiritless match here on Saturday.

Salim Abdourahmane scored the winning goal in the 59th minute.

Both the teams were profligate in front of the goal. The action was mostly restricted to the midfield zone.