Brazil has now hosted Copa America five times and has won all of them. 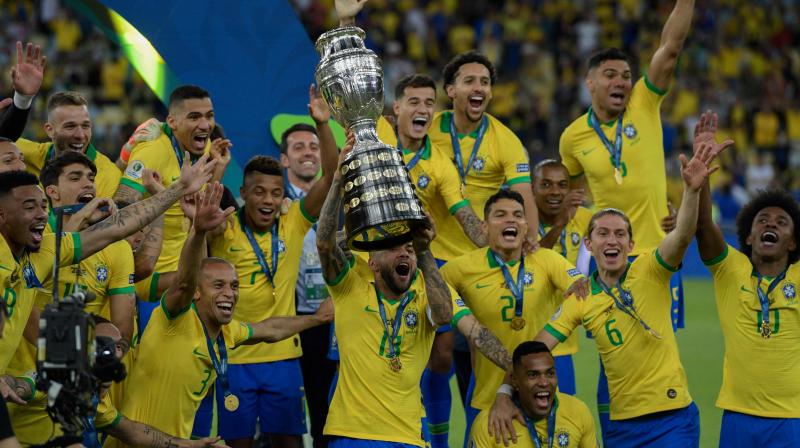 Rio de Janeiro: Brazil lifted its ninth title after comprehensively seeing off Peru by 3-1 in the final of the 2019 Copa America tournament at the Maracana Stadium here on Sunday.

With this victory, the Selecao won the coveted title for the first time since 2007.
For Brazil, Everton Soares, Gabriel Jesus and Richarlison scored for the team, while Paolo Guerrero netted a solitary goal for Peru.

The hosts had a dodgy start with the ball at the beginning of the game as Peru cleverly displayed its aggressive defending and attacking skills and attempted to score a goal to gain an upper hand in the match.

However, Brazil soon recovered from the early wobble and got into the game intensively. Very soon, Soares scored the first goal for the Selecao in the 14th minute.

Brazil and Peru continued to play aggressive football in the entire first half with both teams creating plenty of chances.

In the 44th minute, Peru was awarded a penalty and Guerrero ensured that the opportunity was not wasted as he easily found the net to make it 1-1. However, Peru's celebrations were short-lived when Jesus scored Brazil's second goal to make it 2-1 in half time.

Brazil maintained their intent in the second half too, not giving Peru a possible chance to score another equaliser.

The hosts received a setback when Jesus was sent off after he was shown a second yellow card for tackling roughly with Peru's Carlos Zambrano in the 70th minute.

Even after being down to 10 men, Brazil continued their dominance in the match and Richarlison ensured that there were no more surprises when he netted the team's third goal via a penalty in the dying moments of the game to spark wild celebrations.

Neymar, who did not play in the tournament due to an ankle injury, was seen cheering with his son and sat next to Brazilian president Jair Bolsonaro in the stand.

Brazil has hosted Copa America five times and has won all of them.

On the other hand, Peru, which has won two titles (1939 and 1975), was aiming for their third win in the South American championship.