Ivan Rakitic scored the winner from the spot as Russian goalkeeper Igor Akinfeev dived the opposite direction. 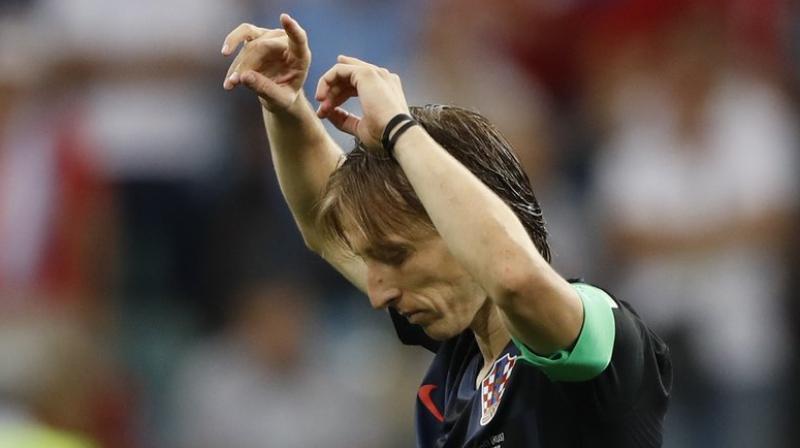 Croatia’s Luka Modric celebrates after scoring a penalty spot in a shootout at the end the quarterfinal match between Russia and Croatia at the 2018 soccer World Cup in the Fisht Stadium, in Sochi, Russia. (Photo: AP)

Moscow: Croatia has beaten host Russia 4-3 in a penalty shootout to advance to a World Cup semifinal against England.

The quarterfinal at Sochi was tied 1-1 after regulation and 2-2 after extra time, forcing both Croatia and host Russia to a shootout for the second consecutive game.

Ivan Rakitic scored the winner from the spot as Russian goalkeeper Igor Akinfeev dived the opposite direction. Akinfeev made on save during the shootout and nearly had another on Luka Modric, but the shot deflected off Akinfeev's hand, off the post and into the net.?

Croatia goalkeeper Danijel Subasic made one save in the shootout, blocking Fedor Smolov's attempt. He also watched Mario Fernandes shot miss the goal wide left in the third round.?

Fernandes had been a hero for Russia earlier when his header in the 115th?minute equalized and sent the match to penalties after Domagoj Vida's goal in the 101st had given Croatia a 2-1 lead.

Croatia is the first team to win consecutive penalty shootouts since Argentina in 1990 and it's the first time the host country has lost in a shootout since Italy in the same year.?

Croatia is in World Cup semifinals for the second time and first since 1998. The Croatians lost to France in the semis 20 years ago?