‘A matter of time before women’s soccer shines’

A globetrotting footballer, Ierene Guerrero, has fallen in love with India and is inspiring Indian women. 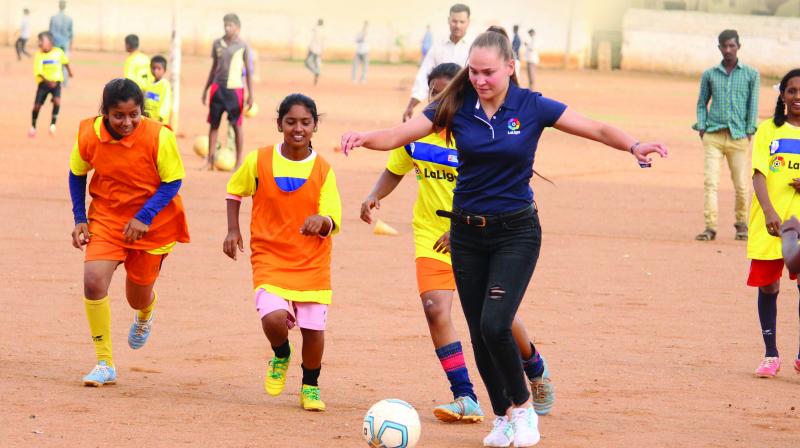 She has been a part of many tournaments such as the COTIF Women’s Football Tournament.

Real Betis Feminas captain Irene Guerrero is a globetrotter but when she came to India recently for a three-day interactive clinic for young footballers in Andhra Pradesh’s Anantpur district, she left a “part of her” behind. She was impressed with the innocence and the talent of the kids, and hoped that the beautiful game of football will find its footing here.

Talking about her visit to India, Irene said, “It was really a rewarding experience for me, and it made me really happy as well. It’s not just a matter of me wanting to go back, it’s that when I came home a part of me was left in India and in the not-too-distant future I hope I can go back and visit you all and see how things have improved.”

Growing up, Irene played all kinds of sports including football. Volleyball, tennis, rugby, swimming… you name it and she had tried her hand at it. But she eventually turned to football and and the midfielder went on to achieve her goals and dreams in the sport. She is now the captain of Real Betis Feminas, the women’s football club of Real Betis based in Seville. She has been a part of many tournaments such as the COTIF Women’s Football Tournament.

Her visit to Anantpur was a first by an international woman footballer and helped create awareness about the sport among kids and their parents. On being asked what she thought of football in India, Irene said, “At present women’s football is not held in high regard but there are girls who are really keen to learn, and this is key for the sport to progress in India.”

During her three-day tour, Irene spent time with budding women footballers at various grassroot centres and interacted with them in a fun, relaxed environment. Irene, along with officials from the La Liga, also distributed training equipment to footballers from the 20 mandals in Anantapur.

“The experience was fantastic… it was an amazing opportunity, and the boys and girls embodied the innocence and excitement of what football is like when it is free from any kind of discrimination,” she said.

Women football in India is not a common sight with few taking up the sport, and Irene said she took out time for the trip in a hope that her contribution will help the country to develop the sport.

“You can’t turn down these kinds of projects. As soon as I’d heard that they wanted me involved, I had no second thoughts. The fact that I’d be able to help people out with my work was a big enough reason for me to take the decision to go. Also, my time here has been great, even though in the begining I found some situations challenging,” said the 21-year-old, who played for clubs such as Híspalis, Azahar and Sevilla before joining Betis.

The LaLiga Foundation and LaLiga’s women’s football department have signed an agreement with the Rural Development Trust in India, known in Spain as Vicente Ferrer Foundation, with the aim of developing football in the most deprived communities of Anantapur.

“I know that LaLiga and the Vincente Ferrer Foundation are doing a great job at fostering inclusion and improving the women’s game there, so I think it’s only a matter of time before the sport is in the position that it deserves in India,” said the 21-year-old, who completed her graduation in Physical Activity and Sports Sciences recently.