Real did not reveal the fee but Spanish media reports said it was the same price Madrid paid for Gareth Bale. 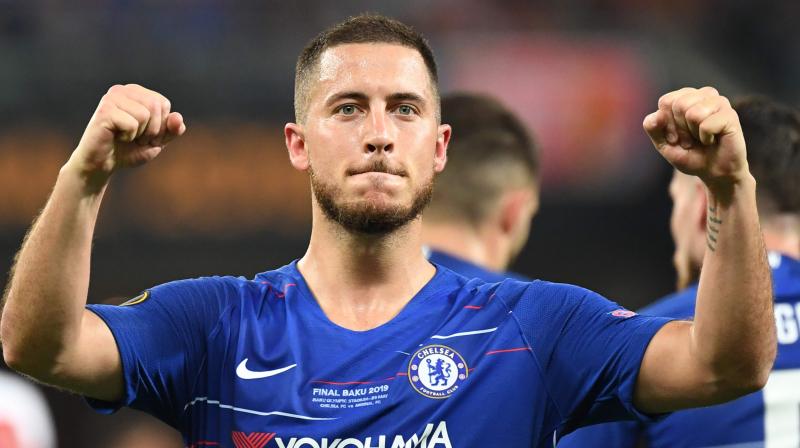 The Belgian will be officially presented at the Santiago Bernabeu stadium next Thursday, subject to completing a medical. (Photo: AFP)

Madrid: Real Madrid ended their long pursuit of Eden Hazard on Friday when they agreed to sign the Belgium winger from Chelsea on a five-year contract for a reported 100 million euros (113.34 million dollars), making him their joint-record signing.

Real did not reveal the fee but Spanish media reports said it was the same price Madrid paid for Gareth Bale when he joined from Tottenham Hotspur in 2013, a staggering amount considering Hazard was set to become a free agent in June 2020.

“Real Madrid and Chelsea have agreed on the transfer for the player Eden Hazard,” the Spanish club said in a statement.

The Belgian will be officially presented at the Santiago Bernabeu stadium next Thursday, subject to completing a medical.

Hazard, who becomes Chelsea’s most expensive sale, expressed his gratitude to a club where he has spent the last seven years while admitting he had always longed to play for Madrid.

“To my Chelsea friends and family: You now know that I will be joining Real Madrid. It’s no secret that it was my dream to play for them since I was a young boy just scoring my first goal,” Hazard wrote on his official Facebook account.

“I have tried my very best not to distract myself or the team through this difficult period of speculation and media attention, especially the last six months.”

Hazard’s transfer is the latest in a long run of ‘Galactico’ signings made by Real but he is also the first top-class player to move to the club since Colombian James Rodriguez in 2014.

Real president Florentino Perez said last month that they tried to sign Hazard on several occasions while coach Zinedine Zidane is a long-time admirer of the Belgian, who he named as a “star of the future” in 2010 when Hazard was playing for Lille.

He leaves Chelsea having recently guided the west London club to the Europa League title, scoring twice in a 4-1 win over rivals Arsenal in last month’s final in Baku.

The 28-year-old joined Chelsea from Lille in 2012 for 32 million pounds (40.61 million dollars) and won the Europa League in his first season. He also won the Premier League title in 2015 and in 2017 as well as one League Cup and the FA Cup.

He scored 16 goals and created another 15 in the Premier League this season as Chelsea finished third in the table.

“Chelsea and especially Chelsea fans will always be special to me and next season I will look for your results first,” Hazard added.

“I hope that we are drawn against each other in the Champions League next season and every season so we can meet again.”

Hazard is Real’s third major signing as they bid to rebuild their squad after an embarrassing campaign on all fronts in which they ended up without a trophy, sacked two coaches and finished 19 points adrift of La Liga champions Barcelona.

They have already recruited Brazilian defender Eder Militao from Porto for a reported 50 million euros and Serbian striker Luka Jovic from Eintracht Frankfurt for 60 million euros.

Brazilian forward Rodrygo is also due to join Real next season after agreeing a reported 45 million euro move from Santos last year.