Barca’s Luis Suarez and Sergio Busquets apologised to fans after the game, as did Valverde. 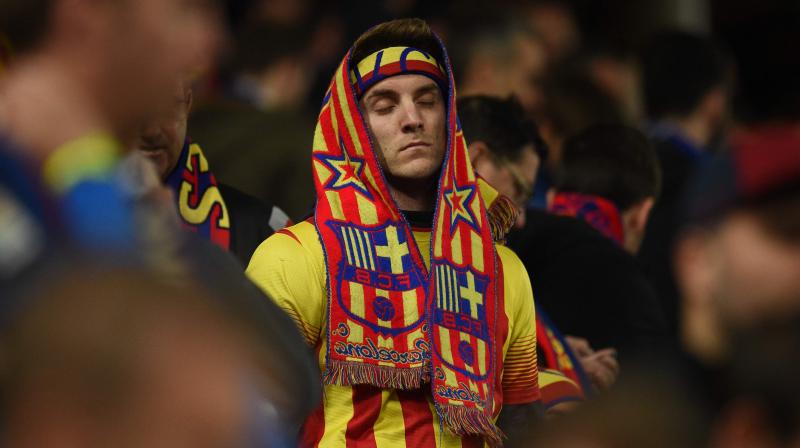 Marca’s ratings, which judge individual performances by awarding players between one and three stars, gave seven of Barca’s starting 11 no stars at all. (Photo: AFP)

Barcelona: The Spanish and Catalan press were in unforgiving mood after Barcelona’s 4-0 surrender to Liverpool in the Champions League semi-finals denied them a place in the final by wiping out a 3-0 advantage from the first leg.
“The biggest embarrassment of all time,” said the front cover of Barcelona-based newspaper Sport on top of a black canvas after the 4-3 aggregate defeat, adding “Barca write the darkest page in their history”.

“A historic failure”, said Marca, listing all the factors in Barca’s favour before the game which deepened the scale of their defeat and denied Lionel Messi the chance to lift the trophy he had clearly targetted at the start of the season.

“They were 3-0 up, Liverpool’s stars were injured, the league was won, the final is in Madrid, Real Madrid were already out and they had the best player in the world.”

Parallels were drawn with Barca’s eerily similar capitulation in last season’s competition to AS Roma in the quarter-finals, when they crashed out on away goals following a 3-0 defeat in Italy after leading the tie 4-1.

Catalan newspaper Mundo Deportivo also talked of an embarrassment and slammed Ernesto Valverde’s side for switching off for the fourth goal, scored by Divock Origi but set up by the quick thinking of Trent Alexander-Arnold.

“A ridiculous goal conceded from a corner will be the epitaph of this team, which repeated the mistakes of Rome,” said the newspaper’s cover.

Barca’s Luis Suarez and Sergio Busquets apologised to fans after the game, as did Valverde, and there is a feeling that the coach is unlikely to survive this latest European failure despite overseeing the team’s domestic dominance.

“The Champions League is too big for Valverde,” said an editorial in Sport.

“Without doubt, Valverde holds a lot of responsibility for this disaster because when the moment of truth arrived he made the same mistakes as last year.”

The players did not escape blame either.

Marca’s ratings, which judge individual performances by awarding players between one and three stars, gave seven of Barca’s starting 11 no stars at all.

Sport’s player ratings meanwhile gave no player more than three marks out of 10, while midfielders Ivan Rakitic and Philippe Coutinho were each given a rating of zero.