Barcelona back on top of Spanish league, courtesy Messi 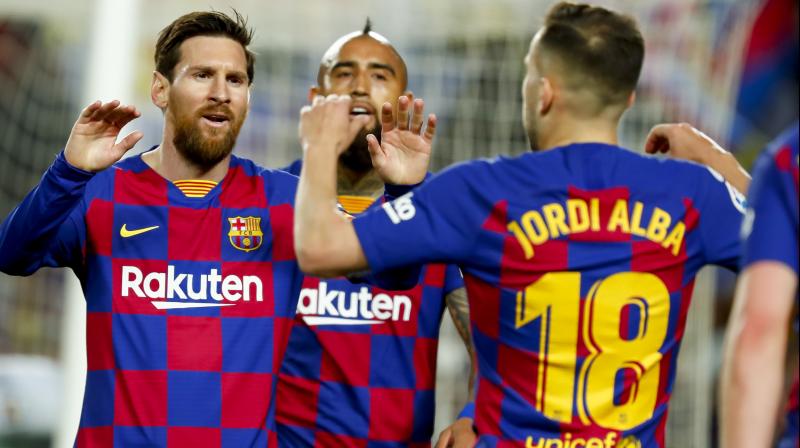 Santiago: With some late help from video review and another decisive goal by Lionel Messi, Barcelona made it back to the top of the Spanish league on Saturday.

Barcelona’s hard-fought win followed last weekend’s loss in the “clasico” against Real Madrid at Santiago Bernabeu Stadium. Madrid now trails Barcelona by two points but has a chance to retake the lead when it visits struggling Real Betis on Sunday.

It was Barcelona’s 22nd straight home win against Sociedad in the league. The Catalan club has not lost points against the Basque Country team at Camp Nou since a 1995 draw.

Messi calmly converted the penalty with a low shot to the corner for his league-leading 19th goal of the season. The penalty was awarded after video review determined a handball by Sociedad defender Robin Le Normand. The foul was not immediately called and Sociedad had a chance of its own more than a minute later before VAR could intervene.

“We got the goal thanks to the VAR, but we had already had other chances to score,” Barcelona coach Quique Setien said. “We struggled at moments but created dangerous chances.”

Video review also called off a goal by Barcelona defender Jordi Alba late into second-half stoppage time because substitute Ansu Fati was offside before making a pass to Alba, who had celebrated by covering his ears with his fingers.

“Nobody likes to see the fans against you,” Alba said.

Forward Martin Braithwaite made his first start since joining from Leganes this month, playing alongside Messi and Antoine Griezmann up front.

Sociedad looked dangerous on counterattacks but couldn’t capitalize on its chances.

“We deserved at least a draw for how we played,” Sociedad coach Imanol Alguacil said.

The Basque club stayed in sixth place, two points behind fourth-place Getafe in the final qualification spot for the Champions League next season.

Sociedad had won three in a row in the league and last week clinched a spot in the Copa del Rey final for the first time in more than three decades. It will play Basque rival Athletic Bilbao in the April 18 final.