Mueller, Boateng, Hummels can take out their frustrations on Wolfsburg, says Kovac

Defending champions Bayern host Wolfsburg in the league on Saturday. 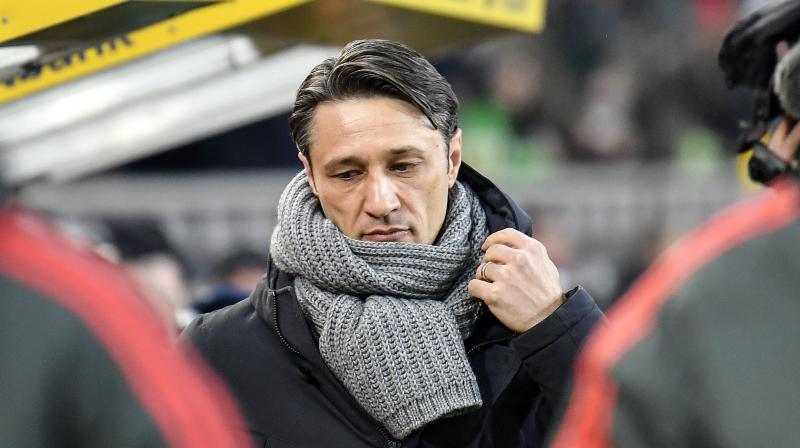 Bayern and Dortmund are level on 54 points with a goal difference of just two keeping Bayern from top spot. (Photo: AP)

Defending champions Bayern, who sit second in the table behind Borussia Dortmund on goal difference, host Wolfsburg in the league on Saturday. It is their final warm-up before their Champions League last 16, return leg at home to Liverpool next Wednesday following a goalless draw at Anfield.

Kovac says Mueller, Boateng and Hummels can take out their frustrations on Wolfsburg after being told by Loew on Tuesday they no longer have a future with Germany.

"I know my players were disappointed, especially to be thrown on the scrap heap, at just 29 or 30," said Bayern head coach Kovac. "That's not right, I think. But the brief disappointment is behind them, so that they will be able to give their best performances."

Mueller, who has made 100 appearances for Germany, scoring 38 goals in a glittering career, has said he is "angry" by the manner in which Loew discarded the trio, lamenting that "it seemed so final". Hummels blasted the handling of the decision as "unfair" and "incomprehensible".

"Of course it's still in their heads and we have spoken about it, but it's in the past now," said Kovac. "Bayern is the future, which they can influence that. "If they focus on that, they are capable of peak performances, but they have the quality to play for their country again."

Bayern could finish the weekend top of the Bundesliga table for the first time since September having caught up with Dortmund, who are home to Stuttgart on Saturday. Bayern and Dortmund are level on 54 points with a goal difference of just two keeping Bayern from top spot.

As the Bavarians chase a fifth straight league win and with Liverpool looming, Kovac said he will only rotate if necessary. "It is always a fine line. We'll see if we need to make a few changes, but only if it's necessary," he said. "I know we need to keep an eye on Liverpool, but first we have to win the match on Saturday."

Midfielder Franck Ribery and Leon Goretzka are back fit, but Arjen Robben is once again sidelined, this time by a calf injury, having just got over a persistent thigh problem. "There is no chance of Robben facing Liverpool," said Kovac.
Dortmund are home to a Stuttgart side in the thick of the relegation battle.

The league leaders showed enough spirit and fight in Tuesday's 1-0 Champions League defeat at home to Tottenham to be confident despite four losses in their last seven games. "That performance (against Spurs) is the yardstick we need to aim to repeat," said director of sport Michael Zorc.

Dortmund head coach Lucien Favre says "two or three players have colds" - without naming names, but he hopes those fit can beat Stuttgart. "There are still ten games left, we'll focus on a game at a time," said Favre, whose side suffered a shock 2-1 defeat at Augsburg last Friday.