Arsenal were forced to stage a second half fightback to secure a 2-1 win at Preston. 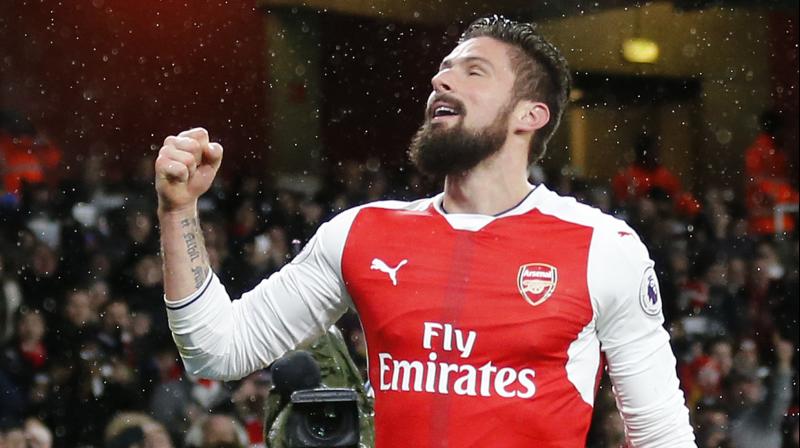 Arsenal were fortunate to be only one goal down at the interval, but they produced a much-improved second half showing. (Photo: AP)

Preston: Arsenal were forced to stage a second half fightback to secure a 2-1 win at Preston on Saturday that extended Arsene Wenger's record of never having lost in the FA Cup third round.

Wenger's side suffered an early shock at Deepdale as Callum Robinson put the Championship side on course for their first victory over the Gunners since 1960.

Arsenal were fortunate to be only one goal down at the interval, but they produced a much-improved second half showing.

Aaron Ramsey got the equaliser less than a minute into the second half and Olivier Giroud completed the comeback in the final minute.

Preston, buoyed by a fervent home crowd, took the lead after only seven minutes to ensure a pulsating cup tie.

Aiden McGeady showed neat footwork in midfield, dragging the ball back and spinning to create space to beat his marker before slotting a pass inside Nacho Monreal for Jordan Hugill.

McGeady was ushered off the ball by Monreal but it broke kindly for Robinson, who took advantage of some leisurely defending to pounce on the ricochet and steer past the on-rushing David Ospina.

Despite fielding a strong side, Wenger must have been disappointed to see his side struggle to cope with the early pace being set by Simon Grayson's team.

Indeed, the only surprise of the opening half was that Arsenal were not trailing by more than a solitary goal.

On 22 minutes McGeady again found space behind the defence to play in Hugill whose cross was met by a strong Robinson header, needing a block from Shkodran Mustafi to deny a goal.

Seconds later, it was Robinson's turn to be the creator, crossing low from the right for the unmarked Hugill who somehow failed to make contact in front of an open goal for what would have been a certain second.

By the time the excellent McGeady crossed from the left and full-back Marnick Vermijl arrived unmarked to volley wide, the Arsenal supporters behind that goal were beginning to voice their disapproval.

Giroud had Arsenal's first meaningful chance on the half-hour, glancing well wide from Ainsley Maitland-Niles' cross, but at least there were signs of Arsenal life.

In quick succession, Lucas Perez and Ramsey should have done better as they tried to walk the ball into the net, only to be blocked by whole-hearted Preston defending.

Giroud chipped across the face of goal when he might have shot, while Perez launched a powerful header that was well held by Chris Maxwell.

Still, there were warning signs for Wenger as a Mustafi error allowed Gallagher a chip which cleared the goalkeeper and was bound for the net until Monreal made an appearance to clear.

Wenger must have delivered a half-time team talk of some impact because, within 55 seconds of the restart his side was level.

Alex Oxlade-Chamberlain launched the attack down the left and, after picking out Alex Iwobi in the Preston area, the ball was worked to Ramsey who struck an unstoppable shot past Maxwell from 18 yards.

Giroud was also handed a chance, from Granit Xhaka's well-judged 65th minute free-kick, but only managed to head directly at Maxwell under pressure from more dogged Preston defending.

And Mustafi was also denied by Maxwell, with a far more impressive reflex save, from a near-post snapshot following an Arsenal corner.

Not for the first time this season, it was the often maligned Giroud who came to Arsenal's rescue with another late goal, this time in the 89th minute when he forced home from six yards after Perez managed to clip the ball back from the byline.

To complete what had become a satisfactory afternoon for Wenger, the Arsenal manager was able to bring on England forward Danny Welbeck for the final seven minutes for his first appearance since damaging knee ligaments eight months ago.