Antonio Conte's side have a two-point advantage on Juventus who play Lazio at the Stadio Olimpico on Saturday. 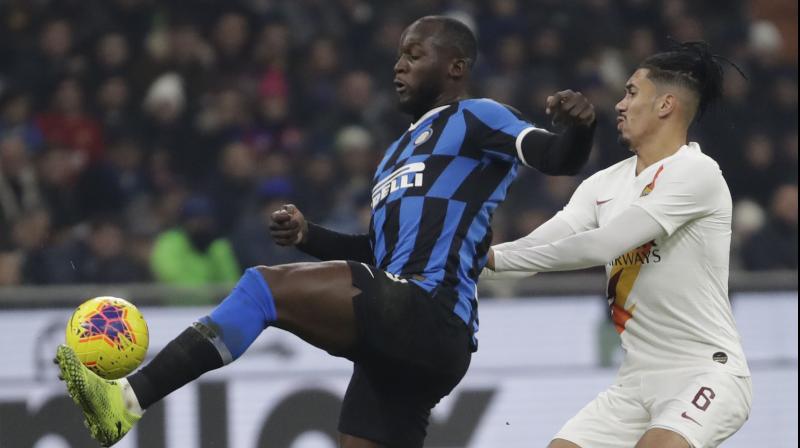 Inter Milan were held to a goalless draw by Roma at the San Siro, leaving the way open for Italian champions Juventus to reclaim top spot in Serie A this weekend. (Photo:AP)

Milan: Inter Milan were held to a goalless draw by Roma at the San Siro, leaving the way open for Italian champions Juventus to reclaim top spot in Serie A this weekend.

Antonio Conte's side have a two-point advantage on Juventus who play Lazio at the Stadio Olimpico on Saturday.

The match in the San Siro had been overshadowed by a racism storm after Italian sports daily Corriere dello Sport's controversial "Black Friday" headline.

The front-page headline accompanied an article about the first Serie A meeting between former Manchester United teammates Romelu Lukaku and Chris Smalling.

On the pitch, defender Smalling and Gianluca Mancini stifled Inter's prolific strike duo Lukaku and Lautaro Martinez, who between them have scored 18 of their team's goals in 15 league games this season.

Conte's side proved toothless in attack against a well-organised Roma, failing to find the net for the first time this season, days before their Champions League clash against Barcelona.

"The great merit of Roma is having stopped Lautaro-Lukaku," said coach Paulo Fonseca.

"Inter's main chances came from our mistakes, but we always played the ball with courage and that's what I want for the team.

"We did well defensively. Smalling and Mancini had a good game like the whole team, it's certainly not easy against Inter."

Lukaku, Marcelo Brozovic and Matias Vecino all missed chances for the hosts as Roma snatched a precious point to move fourth and into the Champions League places.

Inter were lacking in midfield with Stefano Sensi, Nicolo Barella and Roberto Gagliardini all out with Roma missing goalkeeper Pau Lopez while Edin Dzeko started on the bench after flu, but came on for the final 25 minutes.

Midfielder Nicolo Zaniolo took Dzeko's place up front with Roma dominating the first half hour, although Inter had the best chances with Antonio Mirante denying Lukaku after a blundering Jordan Veretout back-pass.

A similar error from the Roma goalkeeper nearly proved costly when Mirante passed the ball straight to Lukaku on the edge of the area just before the break but Marcelo Brozovic wastefully fired over the bar.

Inter held on to top spot but their advantage remains under threat from Juventus with third-placed Lazio eight points behind the leaders.

"We faced an excellent Roma but their goalkeeper was their best player on the pitch, they never had a shot on goal," said Conte.

"I congratulate my players, even if we were wasteful, we should have sealed the three points."

Roma are just one point ahead of Cagliari, with the Sardinians travelling to Sassuolo on Sunday.