The absence of star player Vinicius Junior has captured the headlines even before Brazil reached India. 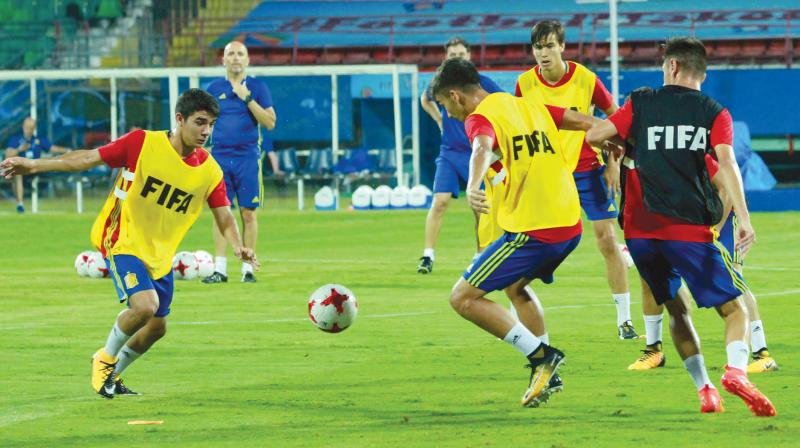 Members of the Spain team train at the Jawaharlal Nehru Stadium in Kochi on Friday, the eve of their Fifa U-17 World Cup match against Brazil. (Photo: Arunchandra Bose )

Kochi: Hungry for titles, Brazil and Spain will also engage in a battle for spectators’ hearts when they meet in the first round of matches in the Fifa Under-17 World Cup here on Saturday. Placed in Group D, expectations are high on the performances of the future stars of world football as the match will showcase the best of talent from the famed academies of Barcelona and Real Madrid and also the attacking footballers from Brazil.

Both the teams are rich in Under-17 World Cup statistics. Brazil have won it three times while Spain, though three-time finalists, are yet to win. But the young La Roja hold the record of most wins (47) and most goals (166). It promises to be a classic, pitting two different styles of football and Brazilian coach Carlos Amadeu agrees. “Both teams play the beautiful game. It will be a classic match. We know their strengths and weaknesses,” he said.

The absence of star player Vinicius Junior has captured the headlines even before Brazil reached India. However, the coach believes it would have no effect on their performances.

“We have had our preparations from 2015 onward. We had many camps and we have created a confidence to play with or without any certain player. There are many alternatives for us. So we are confident in these guys,” he added.

Other star players, Paulinho and Lincoln along with Brenner are expected to lead the forward line for Brazil in the absence of Vinicius Jr. Their defence was also fail-safe during the South American Under-17 championship as they did not concede a single goal and won all matches with authority.

Spain has also come to the tournament after an enviable journey in the Under-17 European championship as they were crowned champions, defeating England in the final. Barcelona forward Abel Ruiz is the spearhead of their attack but they have a leaky defence. They have let in seven goals in the six matches they played in the European championship and considering Brazil are a formidable attacking force, Spain will have to be careful at the back.

NIGER take on North Korea
Also in Group D, Niger and North Korea are considered as minnows but both will have a chance to prove their worth.

Debutants Niger qualified after a successful campaign in their continental cup.

North Korea, who usually play defensive football, also had a good campaign in the Asian Under-17 Championship, where they crashed out to Iran in the semi-final.

A win will be crucial for both teams to get through to the knockout stages. North Korean coach Kim Yong Su feels that their chances of an upset will be based on the performance of their defense.