Argentina were angered that Diaz de Vivar refused to consult with the video assistance to check the incident between Messi and Medel. 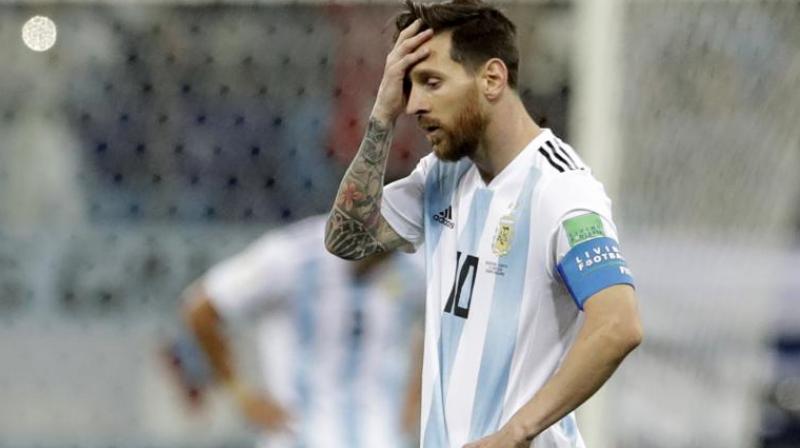 Messi reacted after he was sent-off during Argentina's 2-1 victory in the third place play-off against Chile on Saturday.

The five-time Ballon d'Or winner was involved in a tangle with Chile captain Gary Medel in which Messi appeared to do nothing wrong, but both players were given their marching orders by referee Mario Diaz de Vivar.

"It's unacceptable that as a result of incidents that are a regular part of competition ... unfounded and untrue accusations have been launched that call into question the integrity of the Copa America," said CONMEBOL in a statement posted on its social media accounts.

Earlier, Messi was scathing in his attack on CONMEBOL and the competition's referees after Argentina felt aggrieved for the second match running.

He even accused the governing body of favouring hosts Brazil.

"Corruption and the referees are preventing people from enjoying the football and they're ruining it a bit," said the global star.

"I think there's no doubt that Brazil are going to be champions. The Copa is weighted towards Brazil," he added.

Argentina felt they were denied two clear penalties in their 2-0 defeat to Brazil in the semi-finals, complaining that the referee for that game, Roddy Zambrano, had refused to consult VAR to check the validity of their claims.

And again Argentina were angered that Diaz de Vivar refused to consult with the video assistance to check the incident between Messi and Medel.

Messi had shoved Medel in the back as the Chile captain shepherded the ball out of play.

Medel reacted furiously, chest bumping Messi a couple of times and seeming to push his head towards the Argentina captain, who didn't react.

Yet both were dismissed by Diaz de Vivar.

Messi said his red card was "repercussions" for criticisms he expressed after the defeat to Brazil.

"These accusations are a lack of respect to the competition, to all footballers participating and the hundreds of professionals at CONMEBOL, an institution that since 2016 has been tirelessly working to improve transparency, professionalism and development of South American football," said CONMEBOL.

The governing body said that "a fundamental pillar of fair play is accepting results with loyalty and respect."

Argentina coach Lionel Scaloni had earlier said of Messi's red card: "I still don't understand what Messi did to be dismissed."