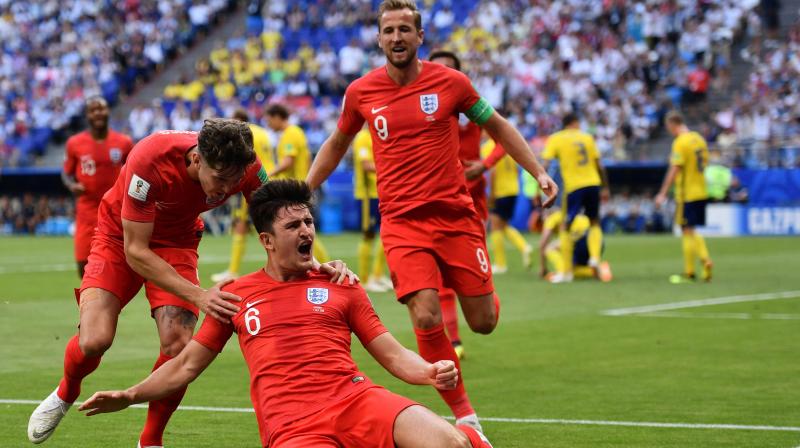 Samara: England reached the semifinals of the FIFA World Cup for the first time in 28 years thanks to goals from Harry Maguire and Dele Alli. The Three Lions beat Sweden 2-0 in the quarterfinal.

At exactly the half-hour mark, it was a header by Harry Maguire off Ashley Young’s corner that gave England the lead.

#ENG WIN! @England book their place in the semi-finals for the first time since 1990!#SWEENG // #WorldCup pic.twitter.com/zOqZAD0kgE

Also, England were the better team with ball possession throughout the game as Sweden hardly got any room for improvement.

In the second half, it was yet another header, this time Dele Alli scoring in the 59th minute, just before the hour mark.

A clinical performance from @England!

That goal all but sealed the match for Gareth Southgate’s men as they remained on course for their first World Cup title since 1966.

They will face the winner of the fourth quarterfinal between hosts Russia and Croatia.

90 + 5': FULL TIME! England go through to the semifinal of the World Cup after beating Sweden 2-0.

90 + 1': Substitution for England. Marcus Rashford comes in for Raheem Sterling.

84': Substitution for England. Eric Dier comes in for Jordan Henderson.

80': Time is running out for Sweden with just 10 minutes to play. Can they create a miracle?

71': OH NO! Marcus Berg (Sweden) misses the goal by an inch, and England goalkeeper Jordan Pickford is furious.

59': GOOOOOAAAAAL! The Three Lions are on a roll here, as Dele Alli has just scored a header to double their lead.

51': England goalkeeper Jordan Pickford makes a fantastic save to deny Sweden an equaliser.

45 (Second half): The second half is underway!

45': One minute has been added in injury time.

30': GOAAAAAL! Harry Maguire scores a header off Ashley Young's corner to put England in front. 1-0, it is.

24': Sweden goalkeeper Olsson makes a fantastic save as he denies England a breakthrough.

The lineups have been announced, and unsurprisingly Harry Kane is a part of the playing XI.

Here is the detailed starting XI.

It will be all to play for when England take on Sweden in the FIFA World Cup quarterfinal clash at the Samara Arena here on Saturday.

The Three Lions are chasing their first title since 1966, and their second overall.

England are boosted by the form of Harry Kane, who is currently the tournament’s top-scorer with six goals.

Meanwhile, Sweden were quite defensive in their approach when they beat Switzerland 1-0 in the round of 16.

Interestingly, both their previous encounters in the World Cup have ended up in draws.

The winner of this match will take on either hosts Russia or Croatia on July 11.