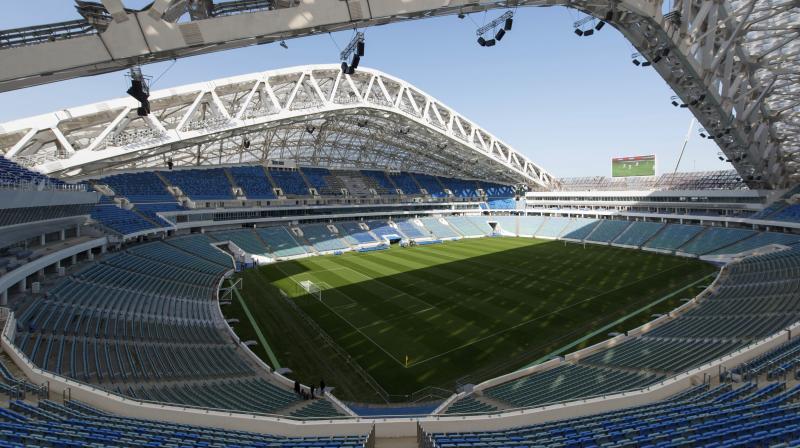 With 64 matches played across 12 stadiums in 11 cities spanning the European part of Russia, the World Cup offers an abundance of potential places to strike, CTC warns. (Photo: AP)

Paris: While moribund in Syria and Iraq, the Islamic State (IS) group poses a real threat to Russia's World Cup that must be taken seriously, security experts warn.

Alarm bells have been ringing since disturbing photo-montages began to appear on social media late last year, the work of the IS propaganda arm known as the Wafa Media Foundation.

Crude and explicit, they showed superstars such as Lionel Messi and Neymar dressed in the frighteningly familiar orange suits used for videotaped executions. Lying on the ground, with knives up against their throats or dying in flames, the message accompanying them was blunt.

"You will not enjoy security until we live it in Muslim countries," the posts said. Brian Glyn Williams and Robert Troy Souza, authors of a report published last month by West Point's Combating Terrorism Center (CTC) on the dangers IS poses to the June 14 to July 15 World Cup, said the propaganda campaign unfurled by IS was "unprecedented".

"In just the past few years, there have been numerous successful terror attacks or thwarted plots in Russia by terrorists linked to or inspired by the Islamic state," they wrote. "This suggests the group may have the capacity to launch attacks in Russia during the World Cup."

These attacks, said the US experts, can be either carried out by "lone wolves" -- assailants who act on their own after being inculcated by IS propaganda -- or by local jihadists. The latter include Russians and people from Chechnya and the rest of the Caucasus and central Asia, two regions with established links to IS stretching back for over a decade.

They mostly comprise fighters who had recently returned from Syria and Iraq after winding down their campaign to create an ephemeral Islamic "caliphate" in the Middle East. Washington's Center for Strategic and International Studies estimates that around 8,500 jihadists from Russia and the former Soviet central Asia have joined the ranks of IS and other jihadist groups in the region.

The exact number of those who have managed to slip through anti-terror services' hands and safely return to their homelands is unclear. But experts are certain that prior to its territorial rout, IS instructed some of its fighters to go back and form sleeper cells that could be called upon when needed -- such as during a World Cup.

Even if Russia had not intervened in Syria on President Bashar al-Assad's behalf, the world's most watched event would still have been a target of jihadists, said Pascal Boniface, director of the French Institute for International and Strategic Affairs, who specialises in geopolitics and football.

"The threat of terror now exists for all international sports competitions. They attract the cameras and, therefore, the terrorists," Boniface said. "Russia's intervention in Syria is an aggravating factor, but it is not what created this problem," said the French analyst. "There would still be a terror threat without it."

Even before Russia, security measures at the Euro 2016 football championship in France, as well as the 2014 London and 2016 Rio Summer Games were already draconian. In March 2016, just three months before Euro 2016 was due to kick off, France's then prime minister Manuel Valls announced the arrest in the Paris region of a hardened jihadist who "surely had the Euro in his sights".

"Today, whenever you have a global sports event, the biggest part of the budget goes to security," said Boniface. Whether they are followed by an attack or not, the act of posting threats online with just a few clicks costs nothing for IS and its sympathisers. Yet these are followed by security operations that could run to tens and even hundreds of millions of dollars.

With 64 matches played across 12 stadiums in 11 cities spanning the European part of Russia, the World Cup offers an abundance of potential places to strike, CTC warns. "While the World Cup venues are hard targets that are set to be protected by multiple layers of security, there will be no shortage of soft targets that terrorists could hit," it says.

In Moscow, the authorities are trying to strike a reassuring tone. They point out that the 2014 Winter Olympics in the Black Sea resort of Sochi were staged on the edge of the north Caucasus and still passed off without a hitch. "Our security operation is taking into account all types of possible dangers and risks," World Cup organising committee chief Alexei Sorokin told AFP. "Everything is under control and I hope that we will find the right balance between comfort and security, without tilting to one side or the other."