It was always going to be hard for a 10-man Nepal to defy India further and Jeje cashed in on the opportunity. 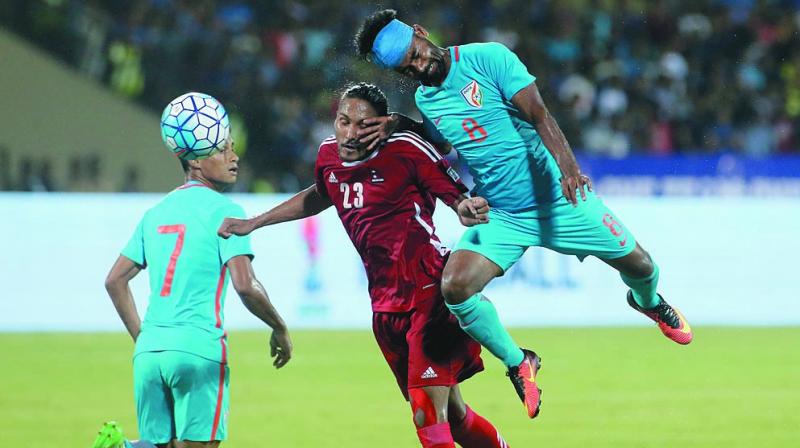 India’s Mohammod Rafique (right) in a tussle with Nepal’s Rohit Chand in their friendly match in Mumbai. (Photo: PTI)

Mumbai: Second half goals from Sandesh Jhingan and Jeje Lalpekhlua’s gave India a 2-0 win over 10-man Nepal in the international friendly at the Mumbai Football Arena here on Tuesday.

Jhingan scored off a left footed half volley to break the deadlock against a defensive Nepal in the 60th minute.

The Punjab defender turned saviour as India’s strikers — Robin Singh in particular — had a poor day at the office  until Jeje added the second in the 78th minute after the impressive Mohammed Rafique pitched in a perfect cross from the right channel.

A confident Indian team with six wins behind them, attacked from the outset and striker Robin Singh had two chances in the first 10 minutes but couldn’t capitalise on them.

In absence of Sunil Chhetri, Holicharan Nazary did the job from the left midfield initially but couldn’t combine with Robin. Nepal started to control the ball in midfield and had couple of ambitious shots on the goal without troubling skipper Gurpreet Singh Sandhu.

Robin was off-target again, sending his header wide on a Jackichand Singh pass from the right.

Head coach Stephen Constantine introduced Eugeneson Lyngdoh for Rowlin Borges inside half an hour. Lyngdoh started to make things happen but continued poor finishing from Robin ensured the scoreline remained 0-0 at half time.

For Nepal, Anjan Bista forced a good save from Sandhu and Nawayug Shrestha attempted lob at an empty goal failed to land in.

As the second half got under way, Robin and Jackichand were replaced by Daniel Lalhimpuia and Bikash Jairu. But it was Nepal who had a first shot when Sujal Shrestha’s tap-in required a full stretch dive from Sandhu. At the other end, Jairu’s powerful shot was well kept out by Nepal goalkeeper Kiran Kumar Limbu. India kept pressing hard and it brought results as Jhingan got one past Limbu.

Down a  goal, Nepal were reduced to ten men after skipper Biraj Maharjan was given marching orders for a foul on Jairu, conceding a free-kick at the edge of the box, which was blocked by the wall.

It was always going to be hard for a 10-man Nepal to defy India further and Jeje cashed in on the opportunity.