Serie A: AC Milan revives Champions League hopes with a 2-1 win over Bologna

Milan had dropped out of the European places after a draw against Parma and loss to Torino but now are level with Roma who are 6th. 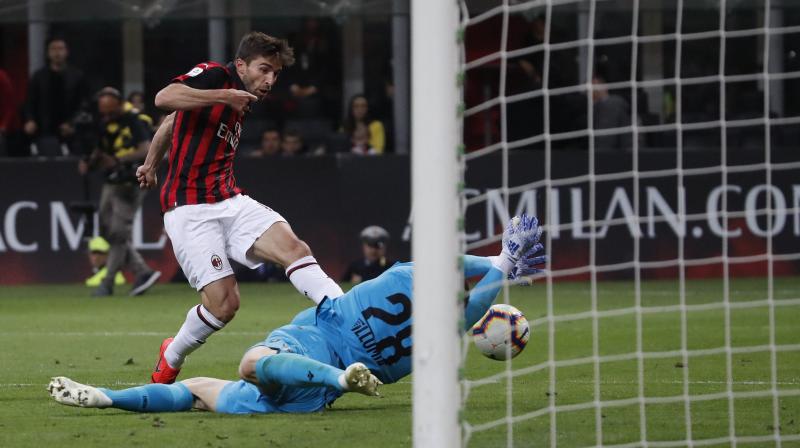 Tempers flared with three players sent off and a bust-up between French midfielder Tiemoue Bakayoko and coach Gennaro Gattuso on the sidelines. (Photo: AP/PTI)

Milan: AC Milan revived their Champions League hopes with a 2-1 win over Bologna on Monday as tempers flared with three players sent off and a bust-up between French midfielder Tiemoue Bakayoko and coach Gennaro Gattuso on the sidelines.

Gattuso's side move back into fifth place -- three points behind Atalanta who occupy the final Champions League berth -- with three games left to play this season.

Milan had dropped out of the European places after a draw against Parma and loss to Torino but now move level on points with Roma who are sixth.

Champions Juventus and second-placed Napoli are already assured of Champions League football next season but the battle for the final two berths remains tight with Inter Milan on 63 points, followed by Atalanta (62), AC Milan (59), Roma (59) and Torino (57).

"These are important points, we're right there now for the Champions League," said Gattuso whose side are targeting a return to elite European football for the first time since the 2013-2014 season.

Spanish winger Suso opened for Milan on 37 minutes with the game springing to life in the second half with Fabio Borini tapping in the second on 67 minutes.

Bologna's Mattia Destro pulled one back on 72 minutes, with Milan playing the final quarter of an hour a man down after midfielder Lucas Paquet was sent off for arguing with the referee.

In a nervy finale Bologna finished the game with nine men with Nicola Sansone and Mitchell Dijks both sent off late.

The absence of the pair could prove costly for Bologna, just five points above the relegation zone, and need points next week against Parma before their final two games against Lazio and Napoli.

There was also pitchside drama early when Argentine midfielder Lucas Biglia picked up an injury 25 minutes into the game at the San Siro with the Milan coach asking on-loan Chelsea player Bakayoko to start warming up.

Bakayoko -- on the bench after arriving late for training -- started to warm up without enthusiasm to the fury of Gattuso who instead asked another substitute Jos? Mauri to come on.

Gattuso and Bakayoko were caught on camera exchanging insults with the French player saying twice "Fuck off, man" and the coach replying "I'll see you later".

"I don't want to talk about that here but in the dressing room, with my words, which I cannot use on television," said Gattuso.

"I waited seven, eight minutes and he still hadn't put on his shin guards, so I chose Jos Mauri. I have 27 players, we wear a glorious jersey," continued the 2006 World Cup winner.

"Anyone can tell me to get lost on the touchline, but we'll then meet in a room eye-to-eye and see. The priority is Milan.

"We have to focus on the victory and not waste time on other things.

"At the end of the season, we will see who has behaved well and who behaved badly."

Bakayoko joined the club on loan from Chelsea last summer with an option to buy for 35 million euros (USD 39 million) but has been the subject of racist chanting this season several times notably from Lazio supporters.