Sports   Football  07 May 2019  'it's in our hands to be in a good position at the end of the season': Pochettino
Sports, Football

'it's in our hands to be in a good position at the end of the season': Pochettino 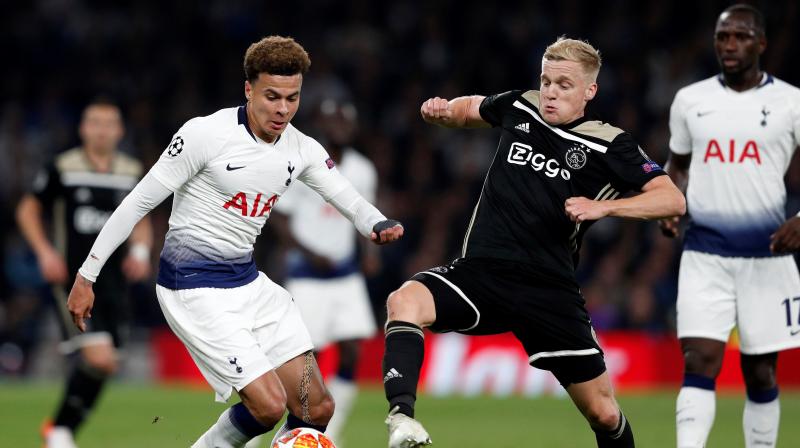 Tottenham go into their biggest game for decades on a low note after losing 1-0 at Bournemouth on Saturday, a defeat that stopped them wrapping up a place in next season's Champions League via a top-four finish in the Premier League. (Photo: AFP)

London: Mauricio Pochettino has challenged Tottenham to seize their unexpected chance to make history as they try to overturn a 1-0 deficit against Ajax in the Champions League semi-final second leg on Wednesday.

Many pundits and fans claim Tottenham have blown their opportunity after Donny van de Beek's strike gave Ajax a priceless lead to defend in Amsterdam.

Tottenham go into their biggest game for decades on a low note after losing 1-0 at Bournemouth on Saturday, a defeat that stopped them wrapping up a place in next season's Champions League via a top-four finish in the Premier League.

It was a third successive loss in all competitions for Tottenham, who finished with nine men after red cards for Son Heung-min and Juan Foyth.

Fortunately for Tottenham, they are still all but certain to finish at least fourth after Arsenal and Manchester United were both held to draws on Sunday.

Tottenham are three points clear of fifth-placed Arsenal heading into their last league game of the season against Everton on Sunday and a draw will be enough to ensure their return to Europe's elite club competition.

But before that Tottenham, trying to reach their first European final since the 1984 UEFA Cup, have to focus on the challenge presented by Ajax's vibrant young side.

Having already eliminated Real Madrid and Juventus this season, Ajax showed their vast potential against Tottenham in the first leg and should have been further ahead after Van de Beek's opener.

Tottenham improved slightly in the second half, but largely looked toothless without the suspended Son and injured top scorer Harry Kane.

Crucially, Pochettino will have Son back from his ban for the second leg and the South Korea forward should give his team a far more dynamic look.

Pochettino remained upbeat despite the frustration of losing to Nathan Ake's last-minute goal at Bournemouth, and the Tottenham manager hopes his confident attitude transfers to his players against Ajax.

"We have ahead two 'finals' against Ajax and Everton and it's in our hands to be in a good position at the end of the season," Pochettino said.

Although Tottenham will know they have missed a golden opportunity to reach the final if they don't succeed in the second leg, Pochettino is adamant his players have done more than enough already to make him proud of their efforts this term.

Hamstrung by playing most of their home games at Wembley before finally moving to their new stadium and without a signing for the last two transfer windows due to the cost of that ?1 billion arena, Pochettino's work this season deserves praise.

Pochettino isn't satisfied with merely competing with the big guns and has already called on Tottenham chairman Daniel Levy to give him the funds required to turn them from contenders to champions.

But, while the Argentine is yet to win a major trophy in his managerial career, he has steered Tottenham to the brink of major success with his deft handling of a tricky situation.

"No-one believed we'd be in this position in the last week of the competition," Pochettino said.

"It's a massive week and that's why we need to move on, try to recover as soon as possible and be ready again but whatever happens I am going to feel proud."