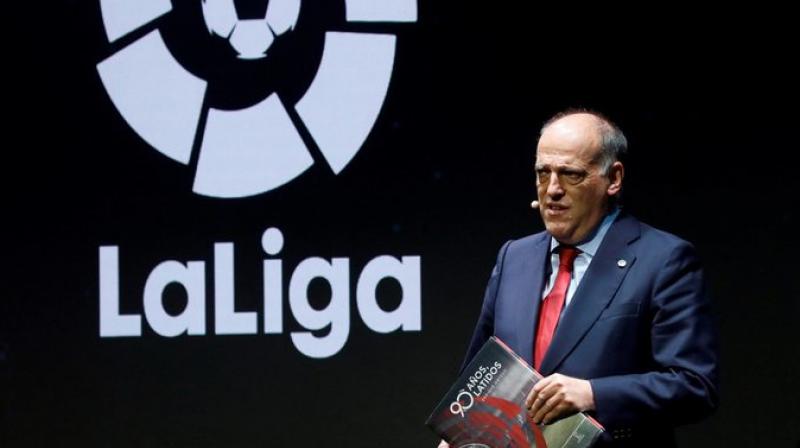 Barcelona: La Liga president Javier Tebas has warned against relaxing UEFA’s financial fair play rules as clubs struggle to cope with a loss of income due to the pause in competitions due to the coronavirus pandemic.

Tebas has long talked of the need to uphold the financial fair play rules, which oblige clubs to break even and are intended to prevent them from receiving unlimited amounts of money through inflated sponsorship deals.

English champions Manchester City were slapped with a two-year ban from European competition in February for flouting the regulations, although the European Club Association (ECA) has said the break-even rules could be relaxed due to the coronavirus situation.

Tebas expressed his opposition to such a proposal, however, citing the fact that Spanish clubs are owed 350 million euros in transfer fees, due to be paid by Sept. 30.

“That’s why it’s important for the regulations to continue as they are and no-one tries to make the most of the circumstances and not pay.”

Spain is the second worst-affected country by the virus in Europe behind Italy and is in the fourth week of a state of emergency. All professional soccer has been indefinitely postponed and players forced to train at home.

Tebas said teams could not begin training again until the state of emergency is lifted on April 26, but he was optimistic that the season could start up either on May 29, June 7 or June 28, most likely without spectators.

He also said the league would not consider declaring the season null and void until it was physically impossible to play the remaining 11 rounds of games, adding that such a scenario would cost Spanish football 1 billion euros.

Completing the season with matches without spectators would lead to a loss of about 300 million euros, he added.

“We have studied the economic effects of not completing the season, but on a sporting level we aren’t even considering it,” Tebas said.

“We won’t have to think about that for a few weeks. We won’t start that debate now as it would be sterile and only generate conflicts of interest such as we have seen in other countries. The biggest leagues should not even consider this for now.”