Atletico began brightly but their gameplan went crashed down when Diego Costa was shown a straight red card in the 28th minute. 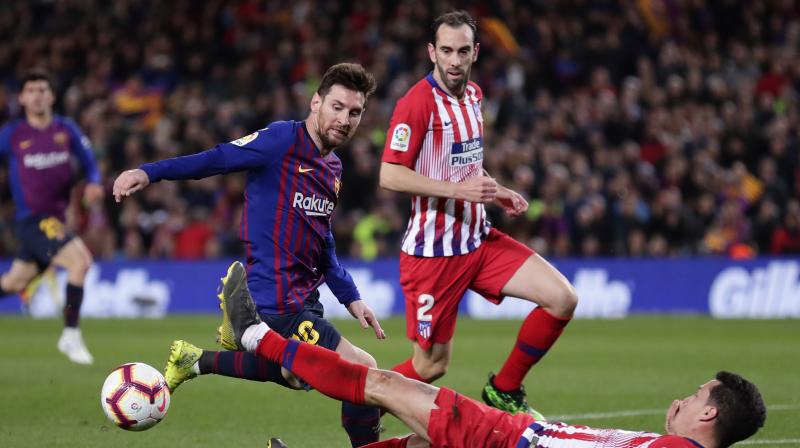 Atletico produced a gutsy second-half display, expertly shackling Barca, but the Catalans finally found a way past the visitors’ outstanding goalkeeper Jan Oblak with a superb curling shot from Suarez in the 85th minute. (Photo: AP)

Atletico began brightly but their gameplan went out of the window when Diego Costa was shown a straight red card in the 28th minute for a verbal tirade at referee Jesus Gil Manzano.

Atletico produced a gutsy second-half display, expertly shackling Barca, but the Catalans finally found a way past the visitors’ outstanding goalkeeper Jan Oblak with a superb curling shot from Suarez in the 85th minute.

Moments later Messi sealed victory and quite probably the league title with an irresistibly cool finish into the net and Barca’s fans jubilantly chanted “champions”, crowing at their surely unassailable lead at the top with seven games remaining.

Atletico midfielder Koke conceded that Barca had wrapped up the title but questioned the decision to send Costa off.

“Barca are practically champions. It was a very strange game, we were doing so well until the red card but all the small details went their way,” Koke told reporters.

“Whenever we come here something strange happens, we’ve had a lot of red cards against Barca and not all of them have been fair. When you have 10 men against one of the best teams in the world it’s normal that it’s a struggle.”

Suarez highlighted his side’s character for winning such a difficult game so soon after their gruelling 4-4 draw against Villarreal in midweek.

“This was another game which shows just how hard it is to win the league so we deserve lot more credit for what we’re achieving,” Suarez said.

“We’ve now got a very big advantage over Atletico. There are still some games left but we took two steps towards winning the league today.”

Atletico realistically needed to win at the Nou Camp for the first time since 2006 to stay in the title race and they played with ambition and intelligence in the opening stages, keeping the ball for long periods and depriving Barca of space.

But they were rocked by Costa’s moment of madness which killed their early momentum and left them with little choice but to defend for the remaining hour of the game.

Striker Costa reacted angrily to not being awarded a foul after being tackled by Jordi Alba and gave a long verbal response to the referee, who to his disbelief pulled out a red card.

Costa had to be shepherded off the pitch by Barca’s Gerard Pique as he struggled to control his temper while his team mates Diego Godin and Jose Gimenez earned bookings for venting their anger over the decision.

Atletico coped superbly with the setback and numerical disadvantage, controlling the space for the majority of the game.

Messi still carved his way through the middle of the pitch on two occasions, creating openings for Suarez and himself but both South American forwards were thwarted by the titanic presence of Oblak.

Atletico naturally had limited opportunities down the other end but were not far from finding a goal when Antoine Griezmann picked out Rodrigo from a free kick but the midfielder headed over the bar when Gimenez was stood behind him, in a better position.

Diego Simeone’s side could not last the distance, however, and as their legs inevitably tired, Barca’s attacking quality made the difference.

“We knew what the game would be like, Atletico are very organised and after the red card we tried to attack more but it wasn’t easy,” Suarez said.

“But we kept going, we showed a great attitude and kept testing their goalkeeper who was the hero of the game.”