Eibar had humbled Madrid 3-0 back in November and looked to repeat history until Benzema headed in an equaliser in the 59th minute. 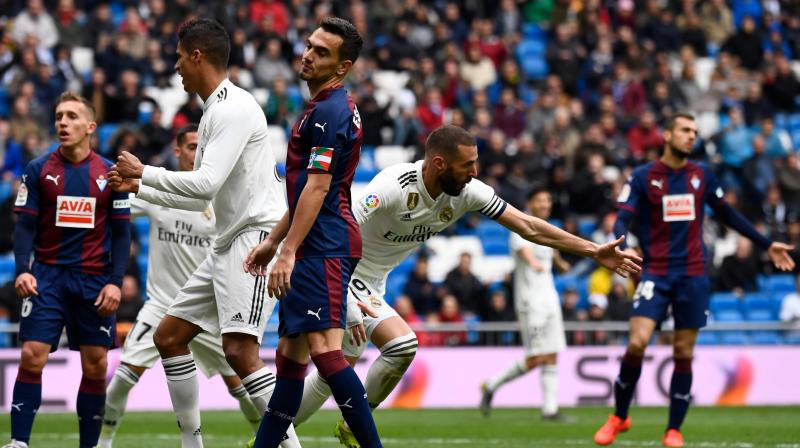 Benzema had an early strike disallowed at a barely half-full Santiago Bernabeu for offside and the visitors took a surprise lead in the 39th minute thanks to a cool finish from forward Marc Cardona, who is on loan from Barcelona. (Photo: AFP)

Karim Benzema scored twice as Real Madrid came from behind to beat Eibar 2-1 at home on Saturday in Zinedine Zidane’s 100th La Liga game in charge of the club.

Benzema had an early strike disallowed at a barely half-full Santiago Bernabeu for offside and the visitors took a surprise lead in the 39th minute thanks to a cool finish from forward Marc Cardona, who is on loan from Barcelona.

Eibar had humbled Madrid 3-0 back in November and looked to be on course to do the double on the deposed European champions until Benzema headed in an equaliser in the 59th minute, shortly after being denied again by the linesman’s flag.

Benzema netted another header in the 81st minute to put Madrid in front and the Frenchman passed up two opportunities to clinch a hat-trick in the closing stages, missing the target and then hitting the post in stoppage time.

Madrid moved on to 60 points after 31 games thanks to the victory but remain third in the standings, 10 points behind leaders Barcelona who host nearest challengers Atletico Madrid in a top-of-the-table clash later on Saturday.

“We have had many games like that this season, I don’t think we lacked attitude but we did lack confidence and we didn’t have a clear idea of how we wanted to play,” said Madrid defender Nacho.

“At halftime Zidane told us to show character and be more confident. We managed to react well to going behind and we played well in the second half.”

Madrid had fallen to their first defeat since Zidane returned to the club with Wednesday’s 2-1 loss at Valencia and the Frenchman again made several changes to his side, who have nothing to play for but pride in the remainder of the campaign.

He rested captain Sergio Ramos and dropped Toni Kroos and Casemiro to the bench in favour of inexperienced Uruguayan midfieder Federico Valverde, while bringing Spanish youngster Sergio Reguilon back in for the suspended Marcelo.

Gareth Bale also returned to the lineup and he put the cross in for Benzema’s first disallowed goal but had strayed offside before he made the pass.

The Wales international again came in for heavy boos from his own supporters for two missed chances and was taken off for Kroos with the game tied at 1-1.

The Germany midfielder bore the brunt of criticism for the defeat in Valencia but made amends by picking out Benzema for the winning goal.