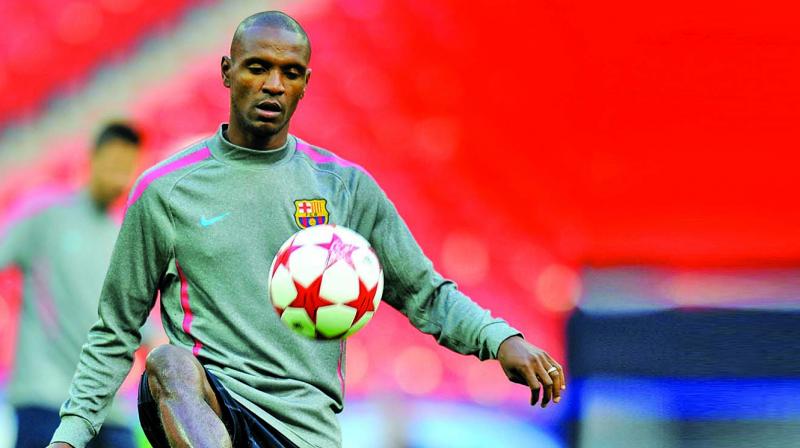 Former stalwarts like Abidal, who triumphed over cancer, are set to conduct training clinics for kids and promote social causes in Mumbai before taking to the field on April 27.

The Legends from Barcelona and Juventus will be involved in a host of football clinics and social campaigns before they play an exhibition match at DY Patil stadium, Navi Mumbai on April 27.

The legends are expected to arrive here on April 24, and will indulge in many pre-match activities. “There are players like Eric Abidal, who has won over cancer and has formed a cancer foundation. They are interested in extending their work in India. So players will have such social engagements,” Kaushik Moulik, the the founder of Football Next Foundation (INF) said.

The former France World Cupper underwent surgery and later returned in Barca colours in 2013 before moving back to Monaco. He runs the Eric Abidal Foundation in Barcelona, along with his wife Hayet.

Besides Abidal, former football legends from Barca like Frank de Boer, Eidur Gudjohnsen, Simao Sabrosa and Jose Edmilson will also be part of the FC Barcelona team which will play in the city. Legends like David Trezeguet, Edgar Davids, Gianluca Zambrotta, Camoranesi and Fabrizio Ravanelli will be donning the Juventus colours.

Trezeguet and Zambrotta are World Cup winners, who have played in the Indian Super League while Davids, de Boer and Edmilson have been part of their national teams in the World Cup. This is the preliminary list of the players released by the organisers and is likely to see some changes.

The Mumbai District Football Association (MDFA) is organising this mega event in association with INF and DY Patil Sports Academy, which is set to be a historic moment for Mumbai football.

From Champions League winners to World Cup winners, both squads are filled with some of the biggest names in the sport.

Moulik was previously instrumental in bringing the Bundesliga side Bayern Munich to Kolkata in 2010 with a lineup of players like Oliver Kahn, Gutt Muller and Thomas Muller.

Vijay Patil, who is the chairman of DY Patil Sports Academy, which will host the match at its ground in Nerul, felt it is an opportunity to build on the momentum after successfully hosting the Fifa U-17 World Cup last year. “A couple of months ago Kaushik approached Aditya Thackeray), who later called me for this opportunity. It is a special occasion to see those legends we have grown up watching on TV,  play here.” he said. “The Fifa U-17 World Cup was a resounding success and we have to sustain that momentum,” Patil added.

In a video message, Thackeray urged fans to come in large numbers. “It is a big day for MDFA. We (MDFA) were watching the U17 football with interest. This time we have legends of the game actually playing and the quality of football will be top notch. Fans can book their tickets at bookmyshow.com and come in numbers to watch the spectacle,” he said.

The game will be telecast live by the two clubs on their own TV. There will be a huge audience to watch it,” said Moulik, adding that the cost of tickets for the public to watch the game at the stadium will be priced between `500 and `1,500.