National coach Loew flew to Munich on Tuesday to tell Mueller, 29, Boateng and Hummels, both 30, that their international careers are over. 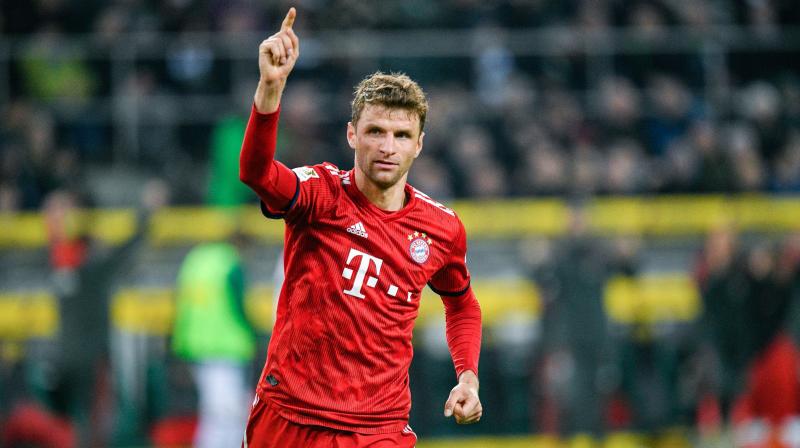 The World Cup winning trio have earned 246 caps between them. (Photo: AFP)

Berlin: Thomas Mueller said he was "angry" over Joachim Loew's "bad taste" decision to axe him and Bayern Munich teammates Jerome Boateng and Mats Hummels from the Germany squad.

National coach Loew flew to Munich on Tuesday to tell Mueller, 29, Boateng and Hummels, both 30, that their international careers are over.

The World Cup winning trio have earned 246 caps between them.

"The more I think about it, the more the way it was done, makes me angry," said Mueller in a two-minute video message posted on his social networks.

"The coach's sudden decision obviously left me puzzled. A coach must make sporting decisions, no problem, I do not have a problem with that.

"But it's mostly the character of the decision that I don't understand. Mats, Jerome and I are still able to play at the highest level.

"The press releases of the German football federation (DFB) and its president (Reinhard Grindel), prepared in advance, were from my point of view in bad taste and showed a lack of consideration."

Earlier Wednesday, Bayern chief Karl-Heinz Rummenigge said he was "irritated" that Loew dropped the bombshell on Tuesday -- a week before the crunch Champions League home game against Liverpool and in the midst of the Bundesliga title race.

"We consider the timing and circumstances of the announcement, both to the players and public, as questionable", wrote Rummenigge in a joint statement with sport director Hasan Salihamidzic.

"The last international match of the German national team took place on 19 November 2018 -- three and a half months ago."

Loew made the announcement with Germany to host Serbia on March 20 in a friendly, before playing a Euro 2020 qualifier away to the Netherlands four days later.

The 59-year-old Germany boss has been under pressure to make sweeping changes since his side crashed out of the 2018 World Cup in the first round.

Mueller, Boateng and Hummels were at the core of the side which won the 2014 World Cup, but the trio were off form during poor displays by the entire team in Russia last year.

"We were surprised that this happened as part of an unannounced visit at (Bayern training complex) Saebener Strasse," said Rummenigge and Salihamidzic.

Bayern are neck-and-neck with leaders Borussia Dortmund on 54 points in the Bundesliga table with only a goal difference of two keeping the Bavarians off top spot.

"The decision is okay, because we are talking about making changes, but the moment is very unfortunate," said Matthaeus, a Sky pundit.

"A week before the game against Liverpool means Loew has only brought unrest to Bayern Munich.

"You could have thrown these three players out of the national team two months ago, after so many years of merit, and not a week before the important match in the Champions League."

Effenberg questioned the logic of discarding so much experience.

"In my view, it wasn't necessary to close the door to the national team for three well-deserving players," said the 50-year-old.

"One thing is for sure, Loew will be measured by it in the future. If the change fails, he will have to bear the consequences."

Mesut Ozil, who has not spoken to Loew since walking away from the Germany set-up last year citing racism, said he felt sorry over Loew's treatment of close friend Boateng.

"I am sorry that one of the best German players in the last decades has to leave the national team in this way," wrote Ozil on Twitter.