Ousmane Diawara scored the all-important goal in the 28th minute to give the home side all the three points. 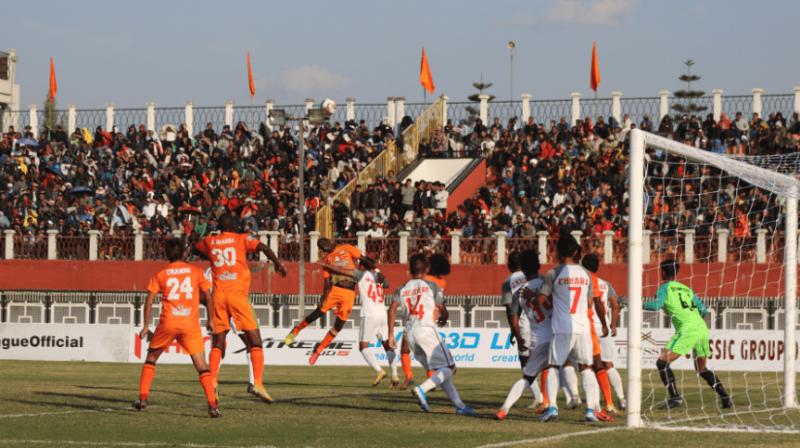 Ousmane Diawara scored the all-important goal in the 28th minute to give the home side all the three points. Neroca had lost 1-2 to Gokulam Kerala in their campaign opener.

Aizawl FC, who dominated the possession, failed to convert any of their 15 shots in the match.

The first big chance of the first half came in the 13th minute for the home team but Chanso Horam, who had a clear shot on left flank, failed to convert the same.

Neroca FC was slowly growing in confidence and another chance came from the right side but Khaiminthang Lhungdim side-netted his shot in the 22nd minute.

The defining moment of the game came in the 27th minute when Neroca got a free-kick from just outside the 18-yard box. Zodingliana's thunderous left-footed kick hit the goal post and Ousmane Diawara capitalised on the rebound, putting the ball in the back of the net.

On the 34th minute, from a free-kick just outside the box, Aizawl FC's Paul Ramfangzauva struck a powerful shot but the Neroca FC goalkeeper dived to his right and made a tremendous save to keep his team's lead intact.

With just a few seconds remaining in the first half, Neroca got another chance to double their lead but the shot on goal by Chanso Horam was deflected from the body of an Aizawl FC defender for a corner.

After the changeover, Aizawl got a corner but the resulting header was cleared by the Neroca defence from the goal-line. In the 66th minute, Aizawl brought on Lalhmangaihkima for William Lalnunfela in order to provide better supply to Abdoulaye Kanoute.

Soon after, Neroca made a tactical change by bringing on midfielder Ronald Singh for Khaiminthang Lhungdim.

Aizawl FC were continuously pushing forward but were not able to break the Neroca defence. The away team came very near to clinching an equaliser in the dying moments but the shot from the outside of the box rattled the Neroca goal post and went out.